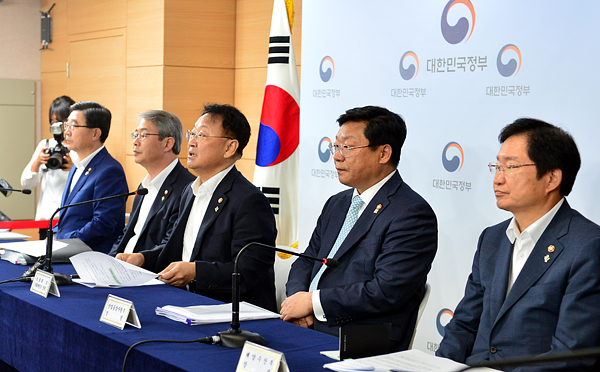 Minister of Strategy and Finance Yoo Il-ho, center, announces the government’s plans to help debt-ridden shipbuilding and shipping companies at the Seoul Government Complex in central Seoul on Wednesday. [NEWSIS]

The government announced on Wednesday that it will create a fund of up to 12 trillion won ($10.3 billion) to finance the restructuring of the shipping and shipbuilding industries.

The fund, most of it financed by the central bank, will allow the government to inject money into the industries’ main creditors - Korea Development Bank (KDB) and Export-Import Bank of Korea (Korea Eximbank) - without having to go through the National Assembly.

“The government will help companies go through their restructuring plans by giving financial support, but we will have to play by the rules if they fail to meet the requirements,” said Yoo Il-ho, deputy prime minister for the economy and finance minister, at a press briefing held at the Seoul Government Complex on Wednesday.

“It is not the right time to say which company will be allowed to die or to live. It is the time to closely look at how these companies will follow up with their own rescue plans. We believe 5 to 8 trillion won will be needed to help the companies, so we have set up the maximum ceiling high in case more spending is needed.”

The fund will be set up for operation by July.

The finance minister said the central bank will provide 10 trillion won in the form of a loan to the Industrial Bank of Korea (IBK), which plays the role of a conduit bank. The capital provided to KDB and Korea Eximbank will be in the form of CoCo bonds issued by them and bought by IBK.

In addition, the Korea Asset Management Corporation (KAMC) will give 1 trillion won in subordinated bonds to the two state-owned banks.

The government will also give 1 trillion won to the banks in the form of shares it owns in public companies.

Along with the establishment of a recapitalization fund for the two state-owned banks, the government has decided to create a command center to oversee the restructuring of the industries over the next two years. It will be led by Yoo.

Wednesday was the first meeting of the command center, which also includes heads of other government agencies and financial authorities.

One of the government’s plans is to designate the shipbuilding industry a special industry for employment support within this month. The government will consider spending some 31.4 billion won next year to support workers laid off by small and midsize shipbuilding companies. It will also extend the due date for some taxes owed by those companies.

“We will consider operating vocational training courses to help workers find new jobs,” Yoo said. The government added that it will give financial aid to shipbuilding companies that change their line of business.

There were some 178,000 people working in the shipbuilding industry as of May. That figure dropped by 9,700 from 188,000 at the end of last year, showing that some restructuring and shrinkage has already started. 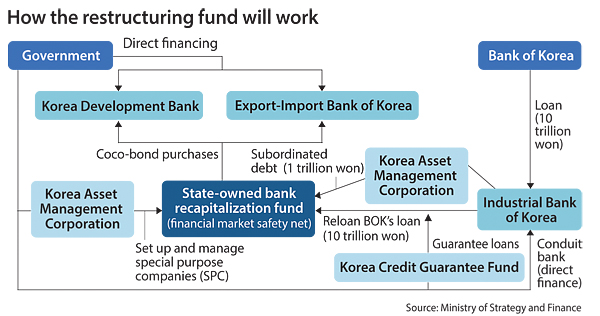 This year, a total of 6,770 workers in the shipbuilding industry filed for unemployment benefits as of the end of last month. That figure rose by 58 percent from 4,292 people in the same period last year.

Yoo emphasized that the government’s plan has nothing to do with the current political situation and that he will carry on with the plans without considering any political factors.

“We [the Park Geun-hye administration] have two more years to go, and we believe this will be the last time for us to revitalize the country’s economy,” Yoo said. “Restructuring is not a short-term goal, and we will continue to work on it for a long period of time to help the economy grow once again.

Yim Jong-yong, chairman of the Financial Services Commission, emphasized that the Bank of Korea (BOK) is doing what it is supposed to when asked how the BOK can take a major role to help companies restructure.

“The BOK’s role is to pay attention to financial stability, and restructuring issues are directly related to this,” Yim said. “The central bank is doing what it needs to do to stabilize the financial market.”

Companies going through restructuring said the government’s plans were not much of a surprise.
“We were waiting for the plans for a long time, but they are nothing more than summarizing what the government has said in the past,” a representative of Hanjin Shipping said. “We will just continue to work on what we have been doing to get the company back on track.”

An official at Hyundai Heavy Industries said they are not comfortable with commenting on the government’s plans, since it has to follow them.

“It is nothing more than pouring in some 10 trillion won, which is nothing very different from what the government has done in the past,” said Park Sang-in, a professor of public administration at Seoul National University. “They didn’t explain why they need this amount of money or what kind of outcome they are expecting.”