Singer a global star after Eurovision

Singer a global star after Eurovision 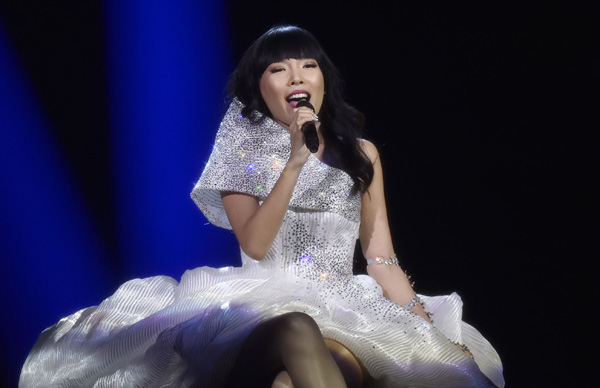 Korean-Australian singer and songwriter Dami Im sings “Sound of Silence” at the final stage of the Eurovision Song Contest on May 14 in Stockholm. [SONY MUSIC]

A dark-haired woman in a sparkling white evening dress appeared on the final stage of the 2016 Eurovision Song Contest held in Stockholm last month.

The song contest is only for up-and-coming singers from 42 countries that belong to the European Broadcasting Union, and this singer, Dami Im, stood out from the rest.

But more than her striking appearance, it was the powerful yet husky voice of this Australian singer-songwriter that made thousands of people in the auditorium fall into silence, fixing their eyes and ears on her in astonishment.

It was only when Im, 28, let go of the final note of her power ballad, “Sound of Silence,” that the audience broke the silence and erupted into cheers and applause. Im finished in second place, and the Korean-Australian singer was immediately thrust into the media spotlight.

Right after the competition, Im told reporters she is just an “ordinary girl and a migrant to Australia from Korea,” but also a singer who “wants to produce meaningful change in this world with my music and influence.”

Although Im was previously not a familiar face in Korea, she was already quite a star in Australia after appearing on the fifth season of the TV singing competition “The X Factor Australia” in 2013.

After winning the show, her songs topped Australian music charts, and she subsequently received a recording contract with Sony Music Australia.

Even before “The X Factor,” Im released a Christian music album in Australia and in Korea in 2011 titled “Dream,” which she wrote and produced herself.

To hear more about her experience on the renowned song contest Eurovision and her life as a singer-songwriter, the JoongAng Ilbo conducted a phone interview late last month with Im, who has been busy with performances and travel. Here are some excerpts from the interview.

Q. You must be very busy since Eurovision. How is it going?

A. It’s been a whirlwind since the contest, with all the media appearances and interviews. I have also been practicing hard for the upcoming tour across Australia that’s set to run from July to December. Yesterday, I participated in a party that the mayor of my city of Brisbane hosted to congratulate me by inviting some of the residents here.

Congratulations on your achievement at Eurovision. However, in Korea, the song contest is not that well known. What can you tell us about it?

It’s the longest-running annual TV song competition, and this year, it was the 61st edition. It is probably one of the most popular television programs and events in Europe. There are about 200 million viewers worldwide, and legendary artists like ABBA and Celine Dion were also winners of this contest.

I participated without much anticipation of getting this far. For about two weeks before the finals, I couldn’t sleep properly, and all I did was practice and practice.

When did you immigrate to Australia?

I was born in Seoul and then moved to Incheon and lived there until I was 9.

Then my dad, who was working at a manufacturing company, had to be relocated to a rural town. My parents said they thought it would be better for me to go to school in Australia than in the countryside, so my mother brought me and my brother to Brisbane and raised us here while my dad stayed in Korea as the breadwinner.

Did you always dream of becoming a singer?

Honestly, I didn’t think I was good at singing. My mother, who majored in vocal music at Yonsei University in Seoul, also told me when I was younger that she didn’t think I had the natural gift of good vocal cords. I began learning how to play piano when I was 5, so I always wanted to become a pianist.

When I had just moved to Australia, I didn’t have many friends and couldn’t even speak fluent English.

But I happened to see a piano at school one day and played it, and since that day, my classmates began to talk to me and looked at me differently. I think I really enjoyed playing the piano ever since.

Then when did you start singing?

When I got into middle school, I fell in love with K-pop. All day long, I would sing along to K-pop, especially BoA’s songs. One day, I got so into the whole singing thing that I installed a recording program on my computer and tried recording myself singing. And oh my, it was so terrible that I was shocked.

Since then, I practiced singing by recording and listening to myself sing until I graduated high school. But for college, I decided to major in piano as my parents advised me.

What’s the biggest difference between Korean and Australian singers?

In Korea, I think talent agencies mainly produce artists that fit into a specific concept they’ve come up with. But in Australia and in Europe, artists actively select their own style and their own music.

In Korea, idol groups are at the center of the music industry. Have you ever dreamed of becoming a girl group member?

I really admire the potential of K-pop. However, I don’t think my looks really fit into that category. Honestly, I don’t think I’m capable of doing only the things I’m told to do.

But I do wish to work in Korea as well. Last year, I appeared on MBC’s “King of Mask Singer,” and it was really fun.

Did you have any struggles growing up as a Korean in Australia?

I sometimes experienced racial discrimination, but most of the people I met in Australia were very supportive and encouraging. But I still agonize about my identity. I was born in Korea and I grew up there, and came here as a young girl and obtained citizenship in my teens. I represented Australia and participated in an international contest. But the truth is, I sometimes feel like I don’t belong in either of the two countries.

What kind of singer do you wish to be?

I believe I was called to deliver good news with my music. I don’t want to sing provocative or lustful songs but songs that can touch the hearts of people and console them. I want to communicate with them with my songs.