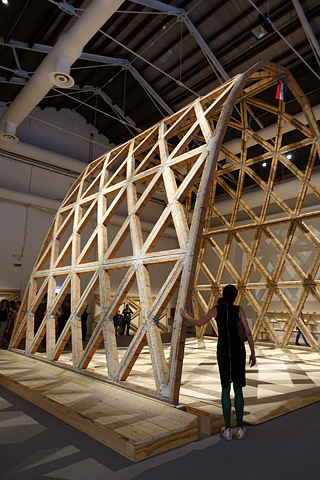 
VENICE - One might expect at the world’s biggest architecture exhibition to see representational models of eccentric structures, trophy buildings by internationally renowned architects, thousands of unique designs for features like windows, doors and stairs, all to excite the imagination.

Instead, visitors to this year’s Venice Architecture Biennale will encounter more down-to-earth, socially conscious works such as a refugee tent displaying photographs and information on how architecture was used by refugees to help them achieve national identity, a set of shelters made with cow dung, a house made of handmade bricks and suggestions on how to deal with buildings that go unfinished due to financial crisis.

This is because radical Chilean architect Alejandro Aravena, who is known for pioneering social housing projects in Latin America, was appointed as the curator and director of this year’s biennale. Aravena made a name for himself internationally by designing so-called half-built houses for use in low-cost housing projects and won the 2016 Pritzker Prize, known as the Noble Prize of architecture.

For this year’s architecture biennale, which is in its 15th edition, Aravena asked the international architects to “report from the front” and come up with “clues,” if not answers, as to how architecture can help improve people’s quality of life and address problems such as mass migration, pollution, access to sanitation and poverty.

This was certainly a drastic change for the biennial event, which kicked off May 28. Although the themes have varied greatly year to year, the previous events dealt with intrinsically architectural subjects and produced concrete outcomes.

“Normally, in an architectural show, it’s about gathering answers,” Aravena said. “But this time, we wanted to make sure before going into answers, we were clear about what questions we were to respond to. So we identified the questions as battles.”

Among the many “battles,” one major issue is mass migration of people moving into cities for better opportunities, education and so on, resulting in a housing shortage.

“The problem here is that the scale and the speed and the scarcity of the means in which we have to respond to this phenomenon is unprecedented in human history,” said Aravena.

He estimates that the world will “need to build the equivalent of a city of one million inhabitants per week with only $10,000 per family,” adding that, “Urbanization will require building at a pace and with a scarcity of means never before seen.”

“If we don’t do so, people will not stop coming to cities, they will come anyhow but will live in appalling conditions,” he said. “So what can we do?”

Aravena says “one clue” to this problem comes from Paraguayan architecture firm Gabinete de Arquitectura, which erected a large masonry arch in the Central Pavilion of the Venice Giardini, one of the main venues for the event. The structure shows how easily accessible and ubiquitous materials like bricks and the use of unqualified labor can help meet the need for rapid urban development.

Meanwhile, one of the “realistic battles” Aravena had to fight, other than curating the whole biennale, was sustainability. By using about 100 tons of waste materials generated by the previous Venice Art Biennale, Aravena created two introductory rooms for this year’s event.

Upon entering the Arsenale, the other main venue for the event, visitors first encounter dozens of steel frames hanging from the ceiling and walls that have been skillfully layered with plasterboard. Although such installations may not seem like the best introductory exhibit for an architectural journey, they set the tone perfectly for this year’s theme, as the scrap materials accentuate the ambience of the semi-abandoned medieval dockyard complex.

Meanwhile, at the entrance of the serene garden of Giardini, a plasterboard facade installation is on display again fitting into the ambience and that of the forthcoming exhibits.

According to the biennale, there are 63 national participants scattered around the historic city of Venice as well as in the two main venues, the Giardini and the Arsenale. Meanwhile, 88 individual participants from 37 different countries are taking part in the main International Exhibition.

Aravena admits that, particularly with such an emotive theme it is not easy for architects to communicate with visitors, as the “actual buildings are either somewhere else or for somewhere else, while there are only representations of the buildings at the exhibition.”

“So there’s a challenge,” Aravena said, “in this architectural exhibition for architects to communicate the experience of such questions raised through the theme.”

Despite the difficulty, many participants, in their own styles, brought up the social challenges faced in their own countries.

For example, the refugee crisis is being addressed by some of the European pavilions, especially Germany. In the German Pavillion, there are holes in the walls of the structure to illustrate the country’s open-door policy to migrants. And the bricks removed to create the temporary door have been stacked up to create benches where people can sit down and discuss how to integrate more than 1 million newcomers into their country.

Tehran-based architecture firm VAV Studio is exhibiting a work that includes a mirror on the ceiling, in an attempt to communicate the difficulty of working in Iran because of the isolation and trade embargo imposed by the United States. Yet, this constraint unexpectedly led to the development of new low-impact building techniques based on materials that are produced locally. 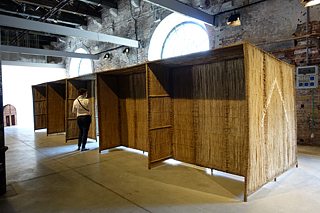 Shelters made from cow dung by Studio Mumbai Architects are erected at the Arsenale. [JOONGANG ILBO]

Korean artist Jae-eun Choi also tackles an issue faced in her country, which is the only remaining divided nation in the world. For “Dreaming of Earth,” Choi worked with renowned Japanese architect Shigeru Ban to realize a floating bamboo bridge across the demilitarized zone that cuts the Korean Peninsula in half. The “floating bridge,” according to the artist, is meant to protect people from the thousands of land mines scattered throughout the area, as well as safeguarding the thousands of species that have made their homes in the untouched area for the past 60 years. Her work is being exhibited in the Arsenale.

There’s also a large refugee tent-like structure in the Giardini that was created by German architect Manuel Herz and the National Union of Sahrawi Women. Inside the tent, visitors can witness displays of photographs, maps and woven tapestries telling stories about the refugee camps in Algeria that have been inhabited by refugees from Western Sahara since its occupation by Morocco in 1975.

“For over 40 years, about 160,000 people were waiting for a nation to receive them,” said Aravena. “Tired of waiting, they decided to use architecture as a way to create nation and help achieve national identity. Mud buildings became their homes, schools and even a ministry of foreign affairs. This is one unusual way in which architecture can contribute to nation formation.”

Aravena has made clear that this year’s Venice Architecture Biennale has a new direction, and that there will not be showy starchitect-infused exhibits but rather down-to-earth, socially conscious works by both renowned and up-and-coming architects. As a result, the media has dubbed this year’s event the “biennale of the poor” or the “humanitarian biennale that deals with basic needs.” 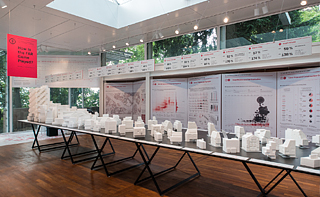 The Korean Pavilion of the Venice Architecture Biennale explains how Korean architects challenge the architectural constraint of the “floor area ratio” regulations with models and blueprints of buildings. [ARTS COUNCIL KOREA ]

Although the biennale is dealing with such issues, Aravena says he hopes people see that there is more to it than that.

“Many other exhibits also tackle issues faced in the developed world,” he said. “There were also houses that were built in the ’60s and the ’70s that may have fought basic issues.”

He explained as an example that collective living, is actually where most of the anger and resentment witnessed today in developed countries comes from.

“They’ve been generated by the same housing complexes that were intentionally constructed to solve basic needs,” he said.

This issue can be explored at the booth of Paris-based architecture firm LAN, which displays models of suburban dwelling complexes that the company created by renovating outdated residential buildings.

Pavilions from diverse countries are also especially interesting for understanding not only social issues but also the architectural constraints faced in each country and how local architects have attempted to solve them. Inside the Spanish Pavilion, which received the Golden Lion award for best pavilion at this year’s biennale, there are nearly 67 proposals and seven photographic series which suggest answers to problems faced in Spain since the financial crisis.

With their project “Unfinished,” architects Inaqui Carnicero and Carlos Quintans say they wanted to suggest answers using their architectural knowledge to solve the problem of having so many unfinished constructions being neglected in Spain following the financial crisis.

Also the Korean Pavilion, which attracted swarms of excited visitors on opening day after being awarded the Golden Lion for best pavilion at the previous event in 2014, has tackled the social issue of “floor area ratio.”

Based on the first initials of this term, the exhibit is titled “The FAR Game.” Kim Sung-hong, the curator of the Korean Pavilion, said that floor area ratio, which refers to the ratio of a building’s total floor area to the size of the piece of land upon which it is built, has always been a constraint for Korean architecture. The exhibition illustrates how local architects have challenged these constraints and have strived to improve residents’ quality of life by utilizing space effectively.

“For the past 50 years, maximizing the floor area ratio has been the driving force behind the sustainable growth of Korean urban architecture and remains the most challenging task for the majority of architects today,” said Kim.

In response to the intensified need for more space in Korean urban structures, Kim and his team analyzed 600,000 buildings in Seoul to identify the problems and solutions related to floor area ratio regulations. The exhibition displays 72 models and 36 blueprints of buildings as well as photographs, video and text information to help foreign visitors understand the Korean issue.