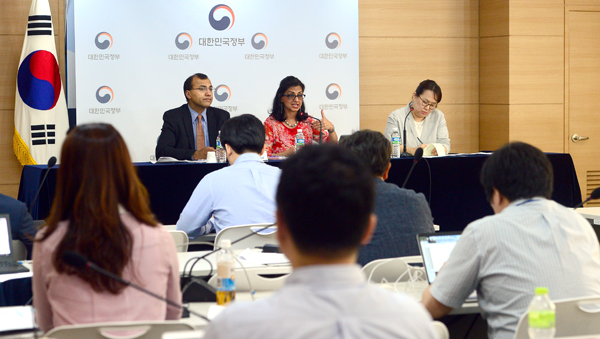 Kalpana Kochhar, a deputy director of Asian and Pacific Department at the IMF, center, announces its staff’s findings on Korea’s economic situation at the Seoul Government Complex, on Wednesday. [NEWSIS]

“We see the [Bank of Korea’s] involvement through the fund as being consistent with the BOK’s mandate to maintain financial stability and I think this is very prudent way to approach,” Kalpana Kochhar, a deputy director of Asian and Pacific Department at the IMF, said Wednesday at a press briefing at the Seoul Government Complex. “I think the BOK’s involvement is justified by that.”

The IMF concluded its annual Article IV consultation with Korea on Wednesday and the team pointed out that Korea faces continued issues that thwart economic growth.

“Korea has made remarkable economic progress over the past 60 years, but now, with income levels still short of the OECD frontier, potential growth has slowed, and in light of population aging, the government is paying increasing attention to inequality and poverty,” Kochhar said. IMF added that the country faces “major structural headwinds including rapid population aging, heavy reliance on exports, corporate vulnerabilities, labor market distortions and lagging productivity.”

However, the IMF said Korea’s economic outlook isn’t all pessimistic.

“The Korean government is taking a proactive approach to address overcapacity and declining growth prospects, with a focus on certain sectors, many of which are facing problems worldwide. In tackling these issues, Korea has the opportunity to be a global leader.”

The IMF also pointed out the importance of implementing additional fiscal stimulus. “Speedy implementation of additional fiscal stimulus should be a priority and should be complemented by monetary easing, and a further tightening of prudent standards for household lending would be desirable,” Kochhar said. She stopped short of recommending the BOK should ease the key interest rate further.

A team from IMF visited Ministry of Strategy and Finance, the BOK and state-run think tanks that included the Korea Development Institute, and discussed Korea’s economic and financial policies during the trip.