Fishers in place of government?

Fishers in place of government? 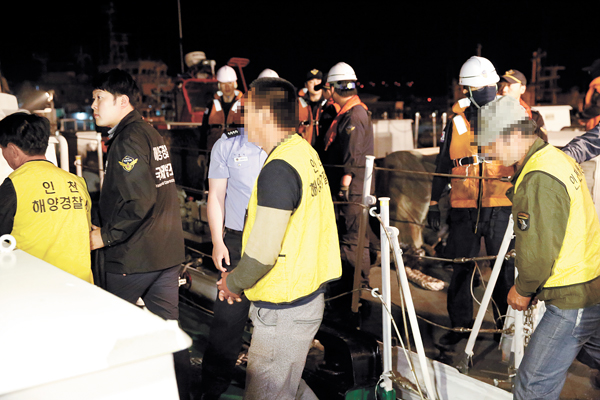 “Why should fishermen risk their lives to capture Chinese fishing boats?” The fishers of Yeonpyeong Island in the West Sea are angry.

When Chinese fishing boats illegally intrude and sweep up fisheries resources from Korean waters, the authorities are not responding properly.

So fishermen took a risk, entering the restricted area on Sunday and capturing two Chinese boats. It was only 550 meters (600 yards) from the Northern Limit Line in the West Sea.

After the incident, the fishermen were even more frustrated. As if laughing at the capture, Chinese fishing boats illegally operated in the waters near Yeonpyeong Island for three consecutive days, and Korean authorities virtually condoned it. Fishermen ask if it is really Korean territorial waters when more than 100 Chinese boats come within 150 meters of the Yeonpyeong Island coastline.

A comprehensive crackdown by the Korean Coast Guard is not so simple in the area in question. If the Coast Guard busts the Chinese boats, they would flee to the North Korean side of the Northern Limit Line. So effective crackdown is a challenge.

The area around the Northern Limit Line is an area of tension between South and North Korea. If any fishing boats cross the line in the course of a crackdown, it could give pretext for military action from North Korea.

Nevertheless, virtually condoning or allowing fishermen to capture Chinese vessels is dereliction of duty. The government needs to listen to the desperate calls of fishermen and civic groups.

The Incheon Peace and Welfare Alliance issued a statement on Monday that designating the waters around the Northern Limit Line in the West Sea as a joint fishing zone for South and North Korea could ease military tensions and prevent illegal operation of Chinese boats.

Local fishermen proposed a realistic plan to consider the trade of purchasing fisheries products caught by North Korean boats and selling them in the Korean market, with a condition of relieved inter-Korean tensions.

Most importantly, Seoul and Beijing need to make serious efforts to reduce confrontation and discord in the West Sea. The two countries need to be sincere and agree on a delineation of maritime boundaries. It is irresponsible to postpone talks and delay a conclusion. It is embarrassing that the “best Korea-China relations in history” is merely diplomatic rhetoric. Peace in the West Sea is more at risk than ever.


*The author is a national news reporter for the JoongAng Ilbo.