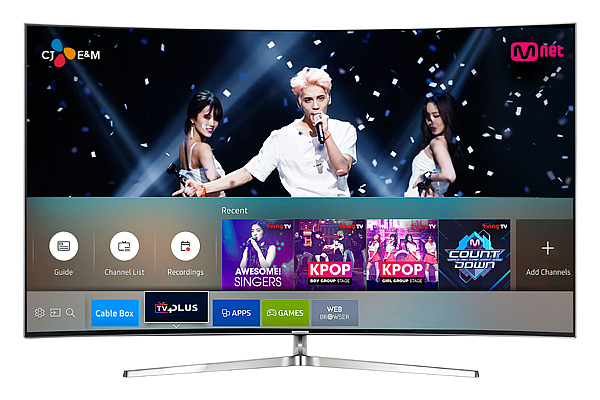 Fans of K-pop stars and Korean dramas in Southeast Asia have had to go to YouTube or other internet streaming services to catch their favorite videos.

Now, Samsung Electronics is trying to revolutionize viewership by running high-resolution channels on its internet-connected TVs, or smart televisions, in the region.

The tech giant said on Wednesday that it launched so-called TV Plus virtual TV channel service in Vietnam and Thailand, where the Korean Wave remains high. With the service, four channels from CJ E&M, Korea’s biggest entertainment content provider, will be available by flipping channels just like a television. Users of Samsung’s Smart TVs can watch “M Countdown,” “Awesome Singers,” “K-pop Boy Group Stage” and “K-pop Girl Group Stage” whenever they choose around the clock for free.

“With the launch of the TV Plus service centered around K-pop content, we expect our Smart TVs to play the role as a cultural propagator,” said Lee Won-jin, executive vice president of Samsung Electronics.

Lee vowed to gradually diversify the content to dramas and films.

Samsung launched TV Plus in Korea in October. The tech bellwether went on to expand its partnership with JTBC, a cable TV channel under the JoongAng Media Network.

The service began running JTBC’s popular shows in February, and news and current affairs programs starting in early May.

For consumer electronics producers, Southeast Asia has grown as important as China. Whereas the economy has slowed and local producers have rapidly caught up with global counterparts in China, consumers in emerging markets such as Vietnam, Thailand and Indonesia are still willing to replace their old devices such as TVs and smartphones with up-to-date models.

Samsung chose Southeast Asia as its strategically crucial market for 2016. It held the first in a series of events to showcase new products, called Samsung Forum, in Kuala Lumpur, Malaysia, on Feb. 1, inviting 1,100 business partners and journalists from Indonesia, the Philippines and Thailand. Samsung is the No. 1 vendor of TVs in Thailand, Singapore and India.

The forum went on to take place in Monaco, Portugal and China.

The Korean government has a bright outlook for content exports to Southeast Asia. The Ministry of Culture, Sports and Tourism set a goal in April to double the content export volume from $1 billion last year to $1.6 billion by 2018.

As of last year, Japan and China accounted for a combined 57.4 percent of imports of Korean content.