No meeting between Xi and Jong-un discussed

No meeting between Xi and Jong-un discussed 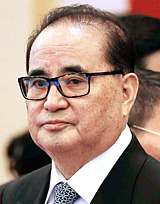 Speculation following Ri’s meeting with Xi has been that a summit could take place either in the latter half of this year or in the early part of next year, if things go smoothly.

The meeting was significant because it was the first time the Chinese president held talks with a senior North Korean official since Choe Ryong-hae, now part of the five-member presidium of the political bureau of the Workers’ Party central committee, visited Beijing in May 2013 as Kim Jong-un’s special envoy.

The source, who asked not to be named, told the JoongAng Ilbo that Ri, who led a roughly 40-member delegation to Beijing between May 31 and June 2, did not get any positive feedback from Chinese officials about a meeting between North Korean leader Kim Jong-un and Chinese President Xi Jinping.

Neither did the two sides find common ground on the matter of Pyongyang’s nuclear program, the source said, adding that it remained unclear whether or not Ri’s visit could lead to additional contact between the two allies.

Based on this account, Pyongyang and Beijing remain at loggerheads over the denuclearization of the Korean Peninsula, as the former is not showing signs of backing down from international pressure while the latter is calling for a denuclearized Korean Peninsula.

Ri’s visit to Beijing, and his meeting with Xi and top Chinese officials, led to speculation that the two traditional allies were working to improve ties after a period of strained relations caused by the North’s last two nuclear tests, in 2013 and last January, against Beijing’s warnings.

Xi and Ri met for just 20 minutes in the Great Hall of the People in Beijing on June 1, and the Chinese leader called for restraint from all related parties in the region, without specifically mentioning denuclearization.

Ri delivered a letter to Xi from Kim, who expressed a desire to bolster traditional friendly relations between the two countries and explained the results of the Workers’ Party’s seventh congress last month.

Wi Sung-lac, a former special envoy for the now-defunct six-party talks aimed at persuading Pyongyang to give up its nuclear weapons, expressed doubt that China would rush to improve ties with North Korea.

“Though China agreed to let Ri visit Beijing after much consideration,” the former diplomat said, “it is highly unlikely that it would enter a conciliatory mode.”