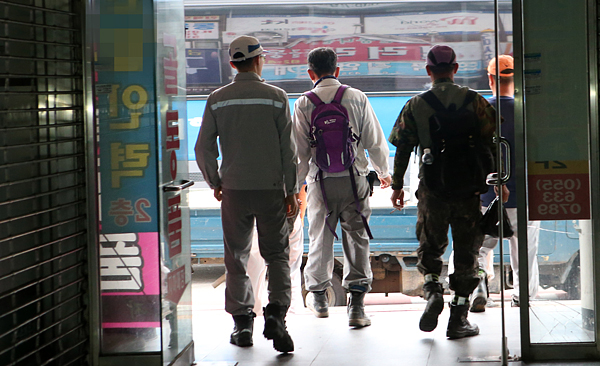 Workers dressed in industrial outfits head to apartment construction sites from a day-labor agency in Geoje, South Gyeongsang, Tuesday morning. About 10 to 20 percent of job seekers that come to the 50 day-labor agencies in Gohyeon-dong, Geoje, are shipyard workers who are suffering from the major restructuring of the shipbuilding industry. [SONG BONG-GEUN]

At barely 5 a.m. on Tuesday morning in the city of Geoje, South Gyeongsang, job seekers dressed in gray industrial coveralls were waiting in front of a fisheries cooperatives mart to enter the nearby offices of day-labor agencies.

Park, 55, is a dockyard worker looking for short-term, mostly one-day jobs through the day-labor agencies. Three months ago, he was working as a piping technician in one of Samsung’s second-tier subcontractor companies.

He earned around 3 million won ($2,596) per month, counting overtime and holiday work. But he was soon forced to look for temporary jobs as he no longer had any work on the weekdays. Last month, he only managed to bring in 1.3 million won.

Leaving his home at around 4 a.m. every morning, Park goes to work at apartment construction sites. One of the agencies placed him on a materials-cleaning job that earns 100,000 won ($86) per day.

Park makes a scant 1.7 million won per month through day-labor, and he can’t pay his 250,000-won rent on time. “I don’t get enough work because it has rained a lot recently, so I’m already out of money,” he says, “I had a bowl of instant noodles for dinner yesterday, and I skipped breakfast this morning. I just hope the shipbuilding industry gets back on its feet so I can work.”

Moon, 41, also a piping technician, started looking for single-day jobs in April, because his team was dismantled due to insufficient contracts from Daewoo. “I need to support my family so I can’t just sit at home,” says Moon, “I’ll have to wait out the recession until I’m employed somewhere else.”

Around 20 percent of the 120 people who look for jobs every morning through Dongwon and Hanil, two day-labor agencies in Geoje, are dockyard workers. The majority of them got the axe because DSME and SHI don’t have enough orders for subcontractors. On weekends and holidays, dockyard workers account for 40 to 50 percent of all job seekers who knock on day-labor agencies’ doors in Gohyeon-dong, Geoje.

Some are still employed, but are seeking other sources of income because their wages were cut. In an interview with the JoongAng Ilbo, Dongwon Agency’s Cho Moon-jong said, “We had 10 to 20 dockyard workers visiting between June 4 and 6, which were holidays.” Hanil Agency’s Hwang Min-ho, 48, told the reporter, “Our office is packed with people because the shipbuilding industry is rolling downhill. It’s just sad.”

Many apartment projects are set up in Geoje by companies like GS Construction and Posco Engineering & Construction (Posco E&C), providing at least some daily jobs for desperate job seekers. On the other hand, workers in Ulsan, where HHI is located, have it much worse because the city lacks such construction projects.

One day-labor agency manager in Ulsan says, “We’ve had 20 to 30 of Hyundai’s second-tier subcontract workers coming each day since March, but we can’t find any one-day jobs for them here.”

Some dockyard workers choose instead to become farmhands, receiving around 100,000 won per day for working under the scorching sun. Since last month, workers from a subcontractor of STX O&S, which was put under court receivership Tuesday, have been working in groups of 10 to 20 in watermelon farms of Haman County and onion farms of Changnyeong County in South Gyeongsang.

Choi Chang-sik, 60, head of the subcontractor company, said, “My employees asked to give a call if there’s any work, even as they were leaving for the farms. I couldn’t say anything. I choked up with emotion for not being any help.”

The number of employees in both DSME and SHI totaled 95,000 early last year, but fell to around 90,000 recently. Labor unions of both companies estimate that around 20,000 more jobs will be cut by the end of this year.

Cho Hyun-woo, planning manager at the Daewoo Shipbuilding Workers’ Union, said, “A massive restructuring will likely take place in the shipbuilding industry after June. The government should alleviate the job crisis in vulnerable areas and implement job transfer programs for faster employment.”