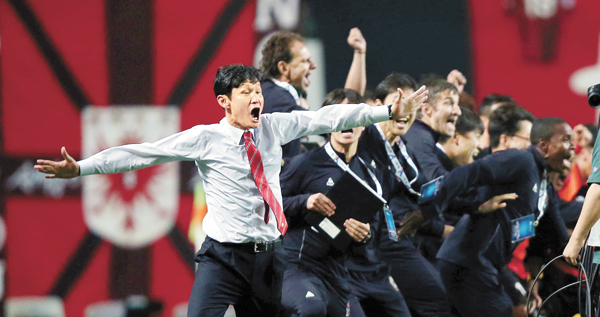 FC Seoul manager Choi Yong-soo rushes the field after defeating the Urawa Red Diamonds of Japan during the Round of 16 match on May 25 to advance to the quarterfinals of the Asian Champions League. [K-LEAGUE]

Ten years have passed since Choi Yong-soo, 43, retired from playing football and started his career as a coach, eventually rising to the top post at FC Seoul.

For the former national team striker, the past decade has been filled enough drama and surprises to make it feel as though he assumed the coaching position for the elite K-League Classic club just yesterday.

“Ten years? Time sure flies,” said Choi during his interview with Ilgan Sports, the affiliate of JoongAng Daily. “I don’t even know how I got this far this quick.”

Thinking back, Choi said that although there were some moments of regret and humiliation, they were outnumbered by those of glory and success.

Choi started his professional career as a footballer in 1994 with the LG Cheetahs, which later became FC Seoul. He left the club for about five years to play in Japan from 2001 and returned home for the final season of his professional career in 2006. As soon as he took off his boots, he accepted a job on the coaching staff of the Seoul-based team, where he worked until 2011 under four different managers. When manager Hwangbo Kwan resigned in the middle of the season in 2011 due to the team’s poor performance, Choi temporarily assumed the skipper position, returning the next season as a full-time manager.

That same year, FC Seoul claimed the K-League Classic title and went on to add more trophies to the team’s shelf under Choi’s watch. FC Seoul was runner-up in the Asian Champions League (ACL) in 2013, and in 2015, the team topped the Korea FA Cup, a national knockout competition involving professional teams as well as those from amateur and university leagues.

But behind the curtain of success hides the setbacks and ordeals that Choi had to endure. The team under his management was often criticized for its passive style of football and starting out seasons slow. During the 2013 season, Choi and the squad were even trapped on the team bus when angry Seoul fans surrounded them after a particularly tough loss to the Suwon Samsung Bluewings

With all the ups and downs, assessments of Choi often diverged considerably. But things are different this year. FC Seoul currently lacks in no aspect, including the season record, performance and even style of play. The three-back formation, which was denounced as passive and tedious, is now commended as a model for other K-League teams. After Choi became the youngest manager to achieve 100 wins at the age of 42 years and eight months, his reputation was boosted even further. Now, some even say FC Seoul could win a triple crown, sweeping titles from major competitions including the K-League, ACL and Korean FA Cup.

For his part, Choi denies he’s as great of a manager as others make him to be.

“I think I am never without something to work on,” Choi said.

In fact, he never considered himself to have even the potential to become a successful manager. “I always thought about becoming a manager but it was more of a hope than a realistic dream,” Choi recollected.

When asked about what forced him to take up the position as caretaker after Hwangbo resigned, Choi answered, “The offer came when the team wasn’t doing well. I pondered whether it was the right time for me to take up the position, let alone whether I could actually handle the responsibility. But I’ve received so many privileges as a player as well as a coach for Seoul. I just couldn’t turn my back to the team. That’s why I accepted the offer.”

According to Choi’s own assessment, at the time he lacked the expertise to handle the new position as manager.

“I knew I had to make wise decisions and that the entire experience was completely different from how things were while I was a coach.”

Choi says he was most inspired by Turkish manager Senol Gunes, who was the first foreign skipper of the team. “I was inspired by his passion for football. I also took away a lot from his tactics. His strategic style became the foundation of my managerial philosophy.”

When asked about winning the K-League title in 2012 as a rookie manager, he credits the team rather than his competence as a manager. “I didn’t contribute anything that year. I was simply spoon-fed the win,” Choi said.

“The way to overcome criticism is by accepting it,” Choi answered when asked about how he overcame all the critiques that came to his way. “What fans say is true and I have to be respectful of that. It is the manager that gave the pretext for the criticism in the first place. It is only correct that the managers assume full responsibility. There is no way of denying this fact.”

Regardless of how far he has brought Seoul, Choi disagrees with those who say he has earned the distinction as a top-notch manager “As soon as I think of myself as one, I have nowhere else to go but down. Such narcissism could destroy me. I am not a great manager, not yet. I would like to be assessed way later in the future.