Korea’s stars continue to see success in the Major League

Korea’s stars continue to see success in the Major League 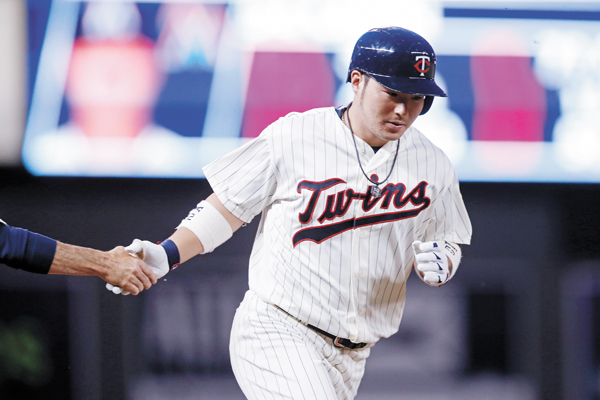 Minnesota Twins Park Byung-ho celebrates his solo home run on Thursday during a MLB game against Miami Marlins. Park’s hit against Marlins pitcher Wei-Yin Chen recorded 419 feet in true distance, according to the ESPN Home Run Tracker. Park went 2-for-4 and scored twice on Thursday to lift the Twins 7-5 over the Marlins. [AP/NEWSIS]

Thursday was another solid day for Korea’s Major Leaguers. While Minnesota Twins slugger Park Byung-ho belted his 11th home run, Kang Jung-ho of the Pittsburgh Pirates smacked a hit worth one run for his club and Kim Hyun-soo of the Baltimore Orioles recorded his first stolen-base in the big league.

Park stepped into the game as the designated hitter and cranked his 11th homer of the season in the bottom of the sixth against the Miami Marlins. His solo homer travelled to the left fence of Target Field, coming off an 86-mile-per-hour slider by Taiwanese pitcher Wei-Yin Chen.

Park initially struggled againstt Chen. During his first at-bat in the bottom of the second, Park barely reached first base after grounding into a force out. Park almost got tagged out from the Marlins’ double play attempt. During his second at-bat in the third inning, Park grounded out from Chen’s 84-mile-per-hour changeup.

Park’s dinger, which came during his third at-bat on Thursday, travelled 419 feet according to ESPN’s Home Run Tracker. Out of the 11 home runs Park has had this season, eight have travelled beyond 400 feet in true distance, securing his reputation as a capable slugger. His biggest hit was his second homer of the season, when he blasted a towering 466 feet on April 17. The dinger is ranked sixth in terms of true distance in the Major League so far this year.

With Park going 2-for-4 with one home run, one run batted in (RBI) and two runs-scored, the Twins defeated Ichiro Suzuki’s Marlins by 7-5.

Elsewhere in the big league, Pirates’ Kang Jung-ho went 1-for-5 against the New York Mets and collected one RBI on Thursday. His RBI came in the bottom of the first when he singled on a line drive to the right side of the PNC Park in Pittsburgh, Pennsylvania. Kang’s single brought home Andrew McCutchen, allowing the Pirates to take the lead over the Mets by 2-0. Kang then added a stolen-base later in the inning. Although the Pirates maintained the lead up until the fourth inning, the team eventually conceded four runs starting from fifth inning and lost the game 5-6.

Kim of the Orioles also saw some time on the field against the Kansas City Royals at Oriole Park at Camden Yards. Going 1-for-4 at the plate while carding one RBI, Kim also nabbed a steal to put up his first big league stolen-base. In the bottom of the fifth, he reached the first base by hitting a single off a 78-mile-per-hour knuckle curve by Edison Volquez. Soon after reaching first base, he stole second base during the next play when his teammate Manny Machado was up to bat. The Golden Glove award-winning catcher Salvador Perez of the Royals tossed the ball from the plate to second base but was unable to take out Kim. The Orioles edged the Royals 4-0.