China has a robot problem

China has a robot problem 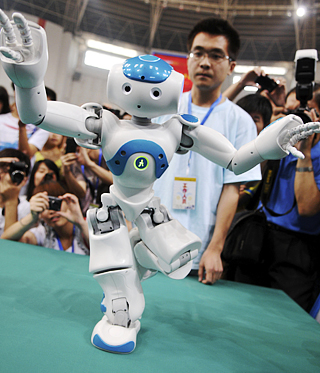 The story first turned up in mid-May: Foxconn, Apple’s favorite manufacturer, was replacing 60,000 of its workers with robots. Everyone from the BBC to Apple fan sites soon reported the ground-shifting news. There was just one problem: It was mostly false.

Last weekend, a Foxconn spokesperson told Chinese media that the company hadn’t laid off anyone, much less replaced them with automation. That part of the story came from overly enthusiastic bureaucrats in Kunshan, a manufacturing town keen to promote itself as a hub for innovation.

The incident seemed like an apt metaphor. Across China, officials are hoping that robots are the future. Thirty-six cities claimed last year that robotics was critical to their development. Shenzhen, the southern Chinese tech hub, is now home to more than 3,000 robotics companies — up from 200 just two years ago.

In theory, this should be great news for a country hoping to encourage innovation. In reality, it’s a sign that China has subsidized yet another investment bubble with capital that would have been better invested elsewhere.

Unlike some previous bubbles, this one was preceded by actual market demand. A shrinking pool of workers and rising labor costs, combined with efforts to diversify the economy beyond low-end manufacturing, have already made China the world’s biggest market for robots. In 2014, it bought about 56,000 of the 227,000 industrial robots purchased worldwide — a 56 percent increase over the previous year. In 2015, it purchased 66,000.

The problem was that most of those robots were imported. So Chinese officials are now hoping to buy their way to global dominance.

This year alone, 77 local governments have pushed policies to encourage robotics. Shenzhen hands out $76 million in annual subsidies to support the industry. Guangdong Province is handing out $55 million this year. Then there’s all the investment in industrial parks, infrastructure and subsidies to companies that want to shift production away from high-cost humans.

Inevitably, that kind of loose money attracts the wrong kinds of people. According to the Economic Observer, an independent newspaper, scams to snag subsidies are proliferating. Many companies with little or no experience in robotics are receiving huge handouts that appear to accomplish little more than pad their bottom lines. One firm in Nanjing said that robot subsidies accounted for 65 percent of its net profit in 2015.

And yet all this isn’t doing much to boost China’s homegrown robotics industry. Eighty-five percent of the robots sold in China are foreign-made, while those produced domestically are largely reliant on foreign components. China is especially far behind in producing the low-cost robots that would help smaller manufacturers struggling with rising labor costs.

This bubble, like all others, will eventually pop. Reports of subsidy abuse have alarmed the legitimate robotics industry, and the appearance of critical stories in a major newspaper hints at tacit state support for cleaning up the mess.

Yet simply reining in subsidies won’t make China a robotics leader. Instead, the government needs to get more selective. Direct grants to companies should be discouraged, for instance. Basic research at universities and institutes, especially in promising fields like artificial intelligence, should get more support.

Above all, policy makers need to show more patience. Last week, President Xi Jinping announced his ambition for China to become “one of the most innovative countries” by 2020, along with a raft of policies to support scientists and engineers. It’d be terrific if that happened.
But developing a culture of innovation takes more than deadlines and a firehose of subsidies. It takes judgement — and time.