BOK cuts interest rate to an all-time nadir of 1.25%

BOK cuts interest rate to an all-time nadir of 1.25% 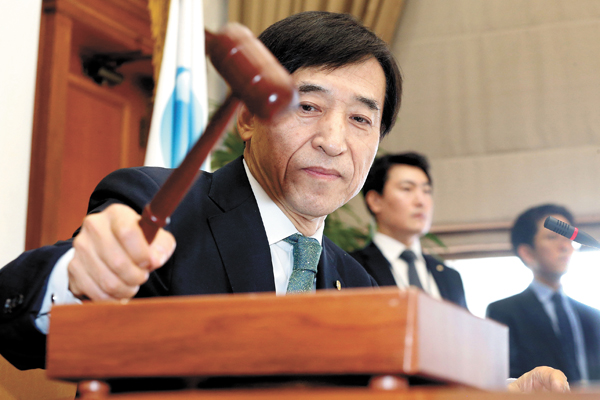 Lee Ju-yeol, governor of the Bank of Korea, bangs a gavel as he begins a monetary policy meeting at the central bank’s headquarters in central Seoul on Thursday. [JOINT PRESS CORPS]

The Bank of Korea (BOK) unexpectedly slashed its key interest rate from 1.5 percent to an all-time low of 1.25 percent on Thursday, the first cut in 12 months, to help the floundering economy.

The news took local markets by surprise, since many analysts had expected a cut in July or later. The BOK made the cut only a day after the central bank and government announced a joint fund to recapitalize state-run banks and rescue shipbuilding and shipping firms currently under water.

BOK Gov. Lee Ju-yeol said after the monetary policy committee meeting that the seven board members unanimously agreed that the Korean economy needed help amid growing downward risks both at home and abroad.

“There are concerns about downward risks in the economy, taking into consideration slowing growth in global trade and the ripple effects of corporate restructuring,” Lee said. “The board concluded that pre-emptive actions are needed.” 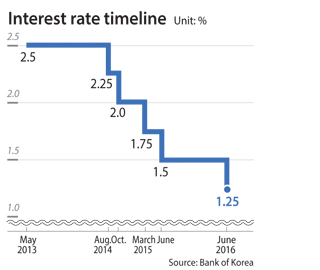 “The growth trend seems to be hovering below the BOK’s April forecast,” he added.

In April, the central bank readjusted its GDP growth forecast for 2016 from 3.0 percent to 2.8 percent based on anemic economic performance in the first three months of 2016.

The situation did not improve significantly in the second quarter.

Domestic consumption and construction declined in April following significant increases in March. The decrease in exports narrowed in May, but considering the number of business days in the two months, the degree of decrease remained unchanged.

Consumer prices are far below the central bank’s 2.0 percent target, rising 0.8 percent in May.

“The growth trend in consumer prices is expected to remain significantly lower than the target rate due to low oil prices and low pressure from the demand side,” Lee said.

“At least in the first half of this year, the economy fared within our growth estimation, but problems will arise in the second half,” the governor pointed out. “Because of budget front-loading in the first six months, the government’s fiscal situation might not help economic growth in the next six months.”

A signal that the U.S. Federal Reserve may raise its interest rate slower than initially planned apparently contributed to the BOK’s latest decision.

Asked when he made up his mind to cut the rate, Lee said, “Last weekend.”

In the United States, a May jobs report came out over the weekend, and Fed Chair Janet Yellen made remarks on Monday signaling a postponement of interest rate hikes.

“As consumption is expected to remain sluggish, or contract even more after the temporary cut on the individual consumption tax ends this month, and as corporate restructuring plans are likely to constrain recovery, there is a greater need for a boost,” said Kim Jung-sik, an economics professor at Yonsei University. “The BOK has acted swiftly.”

“The market had expectations that a rate cut would be made in July or August,” said Lee Chang-seon, a research fellow at LG Economic Research Institute. “Today’s cut is considered by investors to be earlier than expected, but it is what the market has wanted. And the decision was right since there are higher chances that the U.S. will put off its increase for a few months.”

The rate cut is also being interpreted as a change in stance by the central bank on government-led restructuring moves.

There was tension between the government and central bank when the controversy over a so-called Korean-style quantitative easing program was raised in April during the general election campaign.

Lee kept refusing to be involved in such a program, which was a nickname for government-led restructuring of the troubled shipbuilding and shipping industries.

But growing calls for the central bank to do something to prevent a possible credit crunch or liquidity problems in the financial market seemingly changed his mind.

“The central bank did all it can,” said Lee Sang-bin, a business professor at Hanyang University. “Along with the 10 trillion won fund, the rate cut is a clear message that it will play an aggressive role in supporting the economic recovery.”

Lee hinted that the central bank may announce additional cuts, saying, “The rate has become close to the lowest effective level, but there is still room for cuts.”