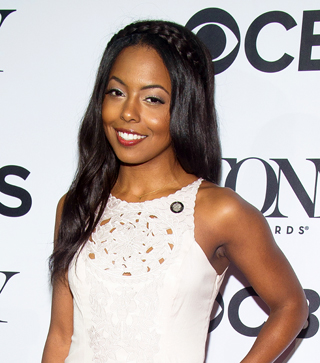 In this May 4 file photo, actress Adrienne Warren, from the musical “Shuffle Along, or, the Making of the Musical Sensation of 1921 and All That Followed,” attends the 2016 Tony Awards nominees press junket in New York.

NEW YORK - When pioneering director and writer George C. Wolfe needed a young actress who could sing and tap to help him give birth to his next show, he turned to Adrienne Warren.

The rising star would attend Wolfe workshops, belt out songs from the 1920s at a piano and dance. It was all very mysterious. There was no title for the show and only a first act on paper.

One day, Wolfe approached her with good news. “He said, ‘You have a job’,” Warren recalled. To which she replied, “Great. What is it? What are you talking about?”

What Wolfe was talking about would become “Shuffle Along, or, the Making of the Musical Sensation of 1921 and All That Followed,” which goes into the Tony Awards on Sunday with 10 nominations, including one for Warren for best featured actress in a musical.

After she came aboard, Warren learned some of Broadway’s best would be her co-stars: Audra McDonald, Brian Stokes Mitchell, Billy Porter, Brandon Victor Dixon and Joshua Henry. Between them, they have nine Tonys and multiple nominations.

“When I actually saw the press release, my jaw dropped. I couldn’t believe it. And then I thought, ‘What am I doing in this room? How am I going to be in this room?’” she recalled with a laugh. “I think I still kind of feel that way.”

Warren, who was raised in Chesapeake, Virginia, and whose other Broadway credit was playing a cool-headed cheerleader in “Bring It On: The Musical,” now has a personal cheerleader in six-time Tony winner McDonald.

“She checks in with me every day and just says, ‘How are you holding up?’ Because she knows what it’s like to be in the situation that I’m in,” said Warren.

The show explores the groundbreaking 95-year-old musical “Shuffle Along,” one of the first on Broadway starring, written and directed by African-Americans. Wolfe wrote the story and Savion Glover did the choreography.

Warren plays two roles - “Shuffle Along” star Gertrude Saunders and then Florence Mills, the actress who replaced Saunders during the show’s run. Warren sings “I’m Simply Full of Jazz” and “(I’m Just) Wild About Harry” as Saunders and “I’m Cravin’ That Kind of Love” as Mills.

Wolfe said in an email that he wanted the same actress who played Saunders in Act 1 to play Mills in Act 2 but knew it “was going to be beyond impossible to find someone to pull this off. And then Adrienne came in to audition and I instantly knew I’d found my miracle performer.”

Warren makes the transition at intermission, going from the ambitious diva Saunders to the more birdlike and demure Mills.

Warren isn’t one to shy away from a challenge. She’s a former basketball player and track runner who believes in doing the work. “From a very young age, I acquired a work ethic that was out of this world,” she said.

Predictably, her career has taken no soft turns. She was twirled in the air nightly for “Bring It On” and toured with the demanding show “Dreamgirls.”

Wolfe said she was tailor-made for his show, being smart, a great singer and having an ability to tap. He likes that she’s confident without being rigid.

“She’s smart and she watches and she absorbs and appears to be unflappable. I adore her maturity and her smarts and her work ethic,” he said. “Oh and yeah, she’s gorgeously talented.”

Warren, who supplies the voice for Maybelline commercials, told her parents first after she found out she’d been nominated for a Tony.