Why no complaint to China?

Why no complaint to China? 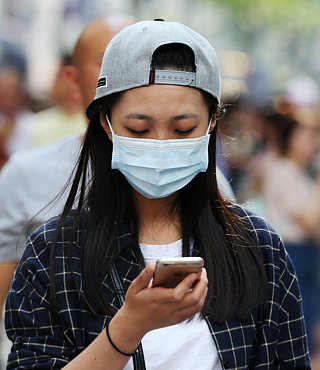 I thought it only happened in other countries: people make a big deal when nice weather comes and take time to enjoy the sunshine. But it is happening to Koreans now, thanks to fine dust.

There were only four days in April when the fine-dust density in Seoul was below the Ministry of Environment standards. There was not a single day when it was below the World Health Organization recommendation. So it is not strange that people wait for a day without fine dust. No one can blame people for only engaging in outdoor activities on certain days.

At first, I thought we might be overly sensitive. As we became well off, we became sensitive to air quality. The fine-dust level in Seoul is clearly lower today than in the early 2000s.

But the air quality has not improved since 2013, and the actual air quality that people feel has worsened because of the dust. In 2012, there was only one day with high levels of dust.

But last year, the frequency went up to 15 days. Even when yellow dust, mostly dry soil particles, occurs, fine dust and pollutants may be low. But no one can distinguish invisible fine dust and obviously visible yellow dust. So it is only natural that people complain about air quality.

I thought Seoul would be the worst, but that wasn’t the case. The fine-dust level on Baekryeong Island in the West Sea was similar to the level in the Seosomun area near Seoul City Hall. The top of Mount Gwanak was not much different from downtown Seoul.

The Ministry of Environment explains that when there is little wind and the air is not circulated, domestic factors matter more. When the westerlies blow, foreign factors become more significant. In other words, while foreign factors make up 30 to 50 percent, it could easily increase to 60 to 80 percent when the pollution level goes up.

We need to start with what can be done. Domestic measures should be the priority, but it is hard to understand that plans for external factors are nowhere to be found. We cannot blame China entirely, and naming domestic factors as solely responsible is also misleading. But we can hardly ignore the accomplice that is responsible for at least 30 percent and as much as 80 percent.

Government measures do mention plans for foreign factors, such as environmental ministerial meetings, cooperation on air quality monitoring and expansion of joint research. But they are already in place. No reinforcement or new plans for the aggravating fine-dust situation are included.

Korea can rightfully protest. The United States already growls at China over the tariff on chicken feet. Is the fine dust that affects our daily routines and threatens our health not as significant as chicken feet?

Environmental groups’ responses are not satisfactory either. They should protest against China as much as they yell at thermal power generation.
If the government cannot protest or make demands because we are not powerful enough, it is a sad thing. If there is not sufficient evidence to prove the effect, it is pathetic. If the government tries to avoid diplomatic friction, it means the government doesn’t take people’s lives seriously. Is Korea unable to complain to China at all now?


*The author is head of the digital team at the JoongAng Ilbo.