KT gets into business of producing VR videos

KT gets into business of producing VR videos 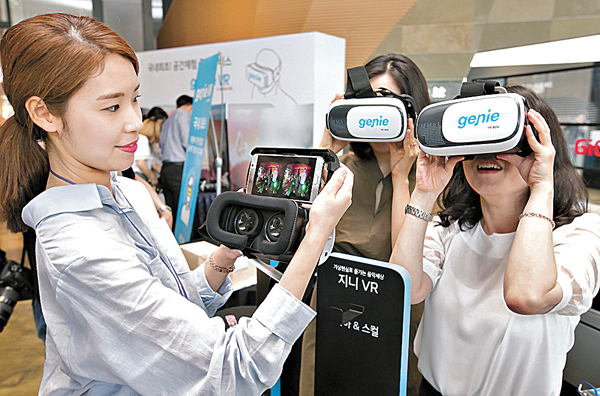 People try out the Genie VR app with virtual reality headsets on Thursday at KT’s headquarters in central Seoul. [NEWSIS]

Genie is the nation’s second-most popular app after MelOn, which is operated by Kakao.

The VR content will include live concerts, album launches and scenes of singers recording in studios.

The mobile operator’s music-streaming subsidiary, KT Music, says it aims to produce some 100 premium VR videos in partnership with seven entertainment agencies by the end of this year, which it hopes to sell to other VR content providers in the future.

KT will be responsible for business planning, content investment and VR player development.

“Show business can make the best out of Genie VR when it comes to album launches or promotions,” said Kim Sung-woo, CEO of KT Music, at a press conference at KT’s headquarters in Gwanghwamun, central Seoul.

“Now that some K-pop bands consist of more than 10 members, installing several 360-degree-angle cameras on stage for VR video will be good for fans who have preferences for a specific member.”

VR live concerts and music videos of three K-pop acts, including Twice and Sam Kim, are already available on Genie, which is in the pilot stage.

As 5G connectivity is expected to become available in four years, telecom operators are scrambling to boost their technological prowess for next-generation internet connectivity.

In April, KT broadcast live a baseball match in VR video format and is preparing to give out 20,000 made-in-Korea cardboard VR headsets for free.