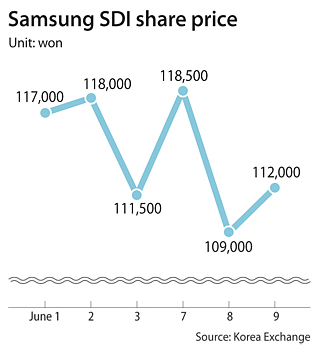 Tesla Motors CEO and co-founder Elon Musk on Wednesday, through a Twitter post, dismissed speculation that the company would make Samsung SDI a second supplier of battery cells for its electric vehicles (EVs).

But shortly after, he unexpectedly admitted that Tesla may source the batteries needed for its energy storage devices from the company.

Shares of Samsung SDI, the chemical arm of Samsung Group, have fluctuated in the past week on news of its business relationship with Tesla. Samsung SDI closed 2.8 percent higher at 112,000 won ($97) on Thursday after slumping 8 percent a day earlier.

“Would like to clarify that Tesla is working exclusively with Panasonic for Model 3 cells. News articles claiming otherwise are incorrect,” Musk tweeted, nodding to Tesla’s 13-year-old exclusive partnership with Panasonic.

The Silicon Valley entrepreneur has been breaking news over Twitter rather than through his publicist.

Inside EVs, a U.S. website specializing in electric vehicles, had raised speculation on June 2 that Tesla had signed a battery supply deal with Samsung SDI by posting a bill of landing that indicated Tesla had received a shipment of Samsung SDI’s lithium-ion battery cells substantially larger than necessary for testing purposes.

Nikkei fanned the flames three days later with a report that Tesla was on the verge of severing its long-time exclusive partnership with Panasonic and making Samsung SDI an EV battery cell supplier ahead of the shipment of its affordable Model 3 EVs.

Tesla has received nearly 400,000 preorders on refundable deposits for the $35,000 vehicle.

The Korean press went so far as to raise the possibility that Tesla may seal more deals with LG Chem and SK Innovation, the chemical units of conglomerates LG and SK.

A source familiar with the matter said that while it was true Tesla and Samsung SDI had discussed the battery deal since late last year, the negotiations had not been successful.

Owing to an oversupply mostly from Chinese manufacturers, EV battery prices currently hover slightly above manufacturing costs, and Samsung SDI was reportedly unwilling to accept the deal offered by Tesla.

When Dana Hull, a Bloomberg reporter, tweeted back at Musk to ask if Samsung would possibly be supplying for Tesla Energy, the noted Silicon Valley entrepreneur tweeted back “yes,” without elaborating further.

Tesla Energy is an energy-storage business unit of the luxury EV producer. The unit churns out energy-saving systems that allow commercial facilities and homes to store energy from solar panels when demand is low.

The system uses lithium-ion batteries, which Panasonic has been supplying since the product launched in 2015.

Musk said earlier that Tesla aims to become the world’s top lithium-ion battery manufacturer through its so-called Gigafactory being jointly constructed with Panasonic in the middle of a desert in Nevada.