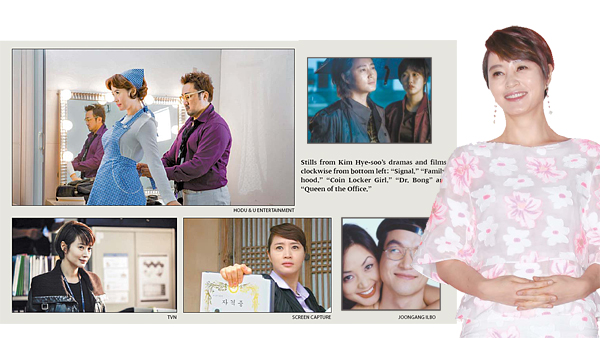 In the film, Kim plays the role of an A-list actress, Go Ju-yeon, who is always embroiled in gossip and rumors. The actress, however, finds her life going downhill. She is no longer asked to play the lead roles in dramas, and her actor boyfriend is cheating on her.

Realizing she has no one, Go decides to become a mother in hopes of starting a family of her own. But becoming a mother is not easy for the actress, who is going through menopause.

But Go happens to come across a pregnant teenage girl named Hyun-soo, and the two make a deal.

“I liked the story, the way it delicately deals with difficult topics in witty ways,” Kim said during a press screening event in Seoul on Thursday.

The film deals with teen pregnancy and it also questions the definition of family, asking whether Go and Hyun-soo, who are not related by blood, could become a family.

Kim has achieved success across different genres of films and dramas, but she reached the peak of her career with the 1995 hit comedy film “Dr. Bong,” and has also been acclaimed for her witty performances in the comedy drama series “Queen of the Office” (2013) and “Home Sweet Home” (2010).

In that sense, “Familyhood” is special for Kim, who is marking the 30th anniversary of her debut this year, because comedy is a genre that she excels at, and her character, Ju-yeon, is similar to herself.

Like Go, who is a fixture in the show business industry, Kim is unmatched, both on the small and big screens.

In a society that admires youth, most actresses begin to play supporting roles when they reach their mid-40s, usually the mother or aunt of the protagonist, no matter how popular they used to be. But the 45-year-old actress still manages to steal the limelight and intrigue audiences with her mature beauty and meaty performances.

Kim doesn’t have to prove herself, but she keeps taking on challenges in various formats and genres.

In “Familyhood,” Kim perfectly portrays Go, who is shallow but good at heart.

In “Signal,” she played the role of a charismatic and intelligent detective who is in charge of cases that have gone unsolved for years, and she nabbed the best actress prize at the Baeksang Arts Awards earlier this month.

In order to play the boss of a loan shark and an organ trafficking business in the 2015 noir film “Coin Locker Girl,” the actress put on weight and went before the camera with a bare face. Her transformation reminded moviegoers of that of Hollywood actress Charlize Theron for the 2003 film “Monster.”

“I make different choices every time through a new project and meet different women. By representing these women, I try to deliver their stories, real stories they wish to tell people through films,” Kim said during her acceptance speech when she received the best actress award at the Korean Association of Film Critics Awards in November.

As she mentioned, all of her previous characters have had different jobs and backgrounds, from a sultry gold digger to a feisty single mother.

On the surface, the roles all look different, but culture critic Han Sang-deok says Kim has been playing similar roles, and that is what makes her one of the only actresses who has been loved for many years.

“Actors act based on things they have, because acting is an expansion of the person he or she possesses inside. Kim has been presenting herself by playing strong, powerful and independent roles over the past three decades,” Han said. “Her acting has matured with time, and it makes Kim an undeniable iconic figure.”

Having debuted at the age of 16, Kim’s first film role was a troubled teenage girl who was good at taekwondo in “Ggambo” (1986).

After her debut, Kim played conventional, fragile female roles who were highly dependent on men until the late 1980s, but she has become synonymous with an independent woman since the 1991 drama series “Three Families Under One Roof,” in which she played a young housewife.

Independent women are quite common in dramas and films these days, but culture critics say it was rare to see such characters on screen back then.

Kim Jeong-wu, co-author of “Star Image Research No. 2: Kim Hye-soo,” wrote in the book that Kim was not afraid of playing a housewife when she was in her 20s, unlike other actresses who avoided such roles.

“Even when she plays the role of a mother, she looks confident and cool, largely thanks to her absolute presence,” Kim wrote.

Kim lives up to her reputation in “Familyhood,” too. The comedy avoids falling into cliches and makes audiences laugh and cry.