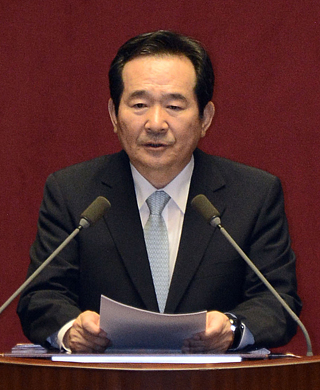 Korea’s 20th National Assembly held its first plenary session Thursday, after squabbles about appointments made it miss its legal deadline by two days.

After weeks of negotiations on forming the legislature, the Saenuri Party, Minjoo Party and People’s Party reached an agreement on Wednesday to allow the Minjoo Party, which has the highest number of representatives, to name the speaker.

Minjoo Rep. Chung Sye-kyun was elected speaker at an extraordinary session, receiving 274 votes out of 287.

“There is so much that the National Assembly needs to do,” Chung said in his acceptance speech, “but the most important task at hand is to handle politics responsibly and regain trust from the citizens.”

The last time a representative who was not from the president’s party was elected National Assembly speaker was 14 years ago.

Formation of the National Assembly, which involves electing the speaker, vice speakers and standing committee chairmen, always involves prolonged squabbling among parties, delaying them from launching on the legal date for nearly three decades.

The National Assembly speaker possesses the unique power to send a bill to a vote. A revision to the National Assembly Act in 2012 restricted this power - the speaker can now call a vote only when a natural disaster, a war or a national emergency occurs; or when the speaker reaches an agreement with each negotiating party - but this didn’t stop the former speaker, Chung Ui-hwa, from putting to a vote a counterterrorism bill and passing it despite the opposition’s filibuster in March.

The Saenuri Party was hoping to hold on to the speaker position, even though the April 13 general election reduced it to the second largest in the National Assembly, with 122 seats in the 300-seat legislature. The Minjoo Party occupies 122 seats (not counting the speaker), and the People’s Party has 38 seats.

The Saenuri Party’s decision on Wednesday to yield the speaker post was an unexpected announcement for many lawmakers. It has been in constant disagreement with the liberal parties for weeks on the issue.

When liberal parties called for a free vote on the post on May 31, the Saenuri Party called off all negotiations on formation of the Assembly. It was clearly going to lose that vote.

On Wednesday, the Saenuri speaker candidate, Suh Chung-won, announced he would not run for the post, and the three major parties agreed to yield the post to the Minjoo Party.

But that produced another interesting twist in legislative politics: the speaker, once elected, is no longer counted as a member of his or her party. That brings the number of Minjoo lawmakers to 122, equal to the Saenuri Party’s seat count.

There were 11 independent lawmakers elected to the National Assembly this year. Seven of them are former Saenuri members, of which five have reportedly expressed their intention to rejoin the party once the formation of the Assembly is completed. The number of former Minjoo lawmakers elected as independents amounts to two.

Thus the Saenuri Party may become the largest party in the Assembly, heightening its chances to elect a speaker for the second half of the Assembly’s term. Each Assembly elects two speakers in succession, one every two years. In order to complete its formation, the Assembly will elect standing committee chairmen on Monday.

The three parties’ deputy floor leaders agreed on Wednesday that the Saenuri Party will take the chairmanship of the Legislation and Judiciary Committee, which was held by the liberal opposition in the 19th National Assembly, and seven more chairmanships of standing committees.

The Minjoo Party will take the helm of eight standing committees and the People’s Party will get two.