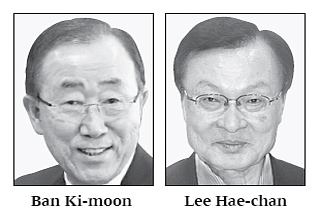 Former Prime Minister Lee Hae-chan cancelled his meeting with UN Secretary General Ban Ki-moon scheduled on Wednesday in New York, in what many see as a display of mistrust toward the world body chief.

Lee and Ban were going to meet over a cup of tea at UN Headquarters at 12:30 p.m. local time on Wednesday, a meeting many observers had expected would help Ban reach out to Lee and loyalists to late President Roh Moo-hyun.

On the cancelled meeting, the UN chief expressed his regret Thursday before reporters at the UN. “I had looked forward to meeting with Lee and it is my regret that it didn’t happen,” Ban said. “I will see him in person at the next opportunity.”

Recalling Lee’s assistance in his election, the 71-year-old Ban added, “Former Prime Minister Lee and former President Roh Moo-hyun provided me with much help during my race for the UN post. I have great respect for Lee.”

Ban’s relationship with the seven-term lawmaker dates back to the former Roh administration when Ban was the foreign affairs minister and Lee was prime minister. Lee is known to have helped Ban get elected at the UN when he was bidding for the coveted job.

A hint of what had led to Lee’s decision to call off the meeting was seen in a statement issued by the Roh Moo Hyun Foundation, for which Lee is the chairman. The foundation said the meeting should have been undisclosed to the press but that Ban’s office indicated they would make it public.

Minjoo Rep. Do Jong-hwan, who is accompanying Lee in the United States with about 10 others, supported this view by saying that the meeting was called off because Ban’s office had intended to bring journalists to the site and hold a briefing session afterwards.

While Ban expressed his praise and gratitude for both Lee and former president Roh, for whom Lee had been a loyal follower, many see the last-minute cancellation of the meeting as an outcome of long-running disappointment and a sense of betrayal felt by pro-Roh members.

While it is widely known that former President Roh worked hard to elevate Ban to the top position at the world body in 2006, following his appointment of Ban as the foreign minister, many in the pro-Roh group have been dismayed and perplexed over what they perceive as Ban’s lack of gratitude and respect for the late president, citing Ban’s decision not to visit Roh’s grave until December 2011, more than two years after Roh’s death in May 2009. Many also resent the former diplomat’s decision not to visit Roh’s grave in August 2009, when he attended the Jeju Peace Forum.

To make matters worse, Ban requested that the Roh foundation not publicize his visit in 2011 to Roh’s grave and meeting with the widowed former first lady Kwon Yang-suk.

The exact reasons behind Ban’s request remain unknown, but many pro-Roh members suspect it was a politically calculated move to avoid ruffling the feathers of the incumbent conservative government. President Park Geun-hye was head of the then-opposition Grand National Party when Roh was in the Blue House.

“It is questionable whether he would have made the same request had the liberal party been in power,” said former lawmaker Yoo Ihn-tae, who was also Roh’s aide at the Blue House. “Everyone back then thought he was so narrow-minded.”