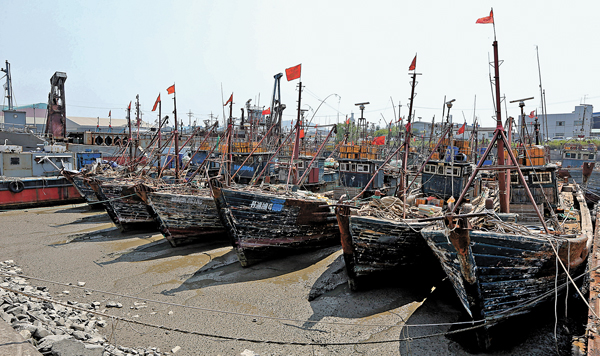 Seized Chinese fishing boats held at Manseok Wharf in Dong District, Incheon, Thursday afternoon. If the owners do not reclaim them, maintenance and disposal fees fall entirely on the KCG. [CHOI JEONG-DONG]

Two Chinese fishing boats were seized Sunday, a fleet of 301 Chinese fishing vessels was sighted along the Northern Limit Line on Tuesday and the Incheon Coast Guard captured two 90-ton ironclad boats loaded with 1.4 tons of fish hours later, but pursuing interloping Chinese vessels is not the only problem of the Korean Coast Guard (KCG), as wharves are jammed with boats due to owners who abandon them to avoid paying impound fees.

The Manseok Wharf in Dong District, Incheon, was packed with 24 seized boats Wednesday afternoon, ranging from small 12-ton boats to ironclad 100-ton vessels, all flying red colors studded with five yellow stars. One of the ship’s 3-ton nets was still full with clam shells, proof of its illegal fishing activities.

“Only one boat was captured last year. The rest were seized between March and May this year while fishing illegally on the seas near Incheon and South Chungcheong,” said Shim Jae-in, 38, head of a maintenance company that oversees the boats for the Incheon Coast Guard, in an interview with the JoongAng Ilbo. “Normally we have 10 boats kept here, but the number has doubled because trespassers are swarming the seas.”

Aside from Incheon’s Manseok Wharf, boats are also kept at six other ports, including those in South Chungcheong, Gunsan in North Jeolla and Mokpo in South Jeolla. Maintenance of the boats is outsourced to subcontractor companies. These boats are returned to the owners when they pay the fees, or ultimately scrapped if the court gives forfeiture orders.

The KCG raised the impound fee from the 100-million-won ($86,490) maximum set in 2012 to 200 million won per boat, excluding fines, to curb the rise of illegal fishing. But owners aren’t so keen to pay up since shabby wooden boats simply aren’t worth the money.

Owners have learned from experience that usually only the worst troublemakers, such as those who resort to violence, are arrested. Until 2014, only the captains were typically detained while the rest of the sailors and boats were deported. Owners took advantage of this and hired captain after captain to either serve prison sentences or return to cross-border fishing.

Seized Chinese boats that are not reclaimed take up more than wharf space, as the KCG ends up paying maintenance and storage fees to subcontractors, and the fees snowball as each day passes. On average, a fishing boat costs 85,000-won in maintenance fees per day, and if ultimately disposed, the cost is typically 380,000-won per ton. From 2011 to 2015, approximately 166 million won was spent on such expenses.

To combat cross-border fishing, the KCG increased its forfeiture and ship-breaking budget to 1.34 billion won from last year’s 190 million won, yet more Chinese fishermen are fishing in the fertile spawning areas around the inter-Korean maritime borders, leaving South Korean waters devoid of fish.