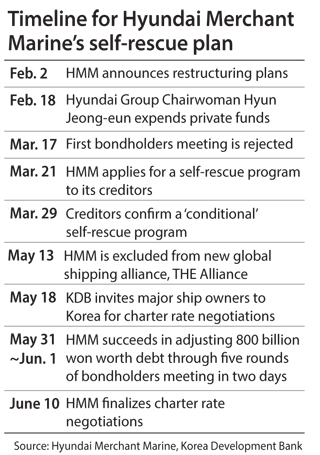 Hyundai Merchant Marine (HMM) has cut its charter fees by 21 percent after four months of negotiations with ship owners, the company and its main creditor, Korea Development Bank (KDB), announced Friday. The final deal will be inked by the end of this month.

The troubled shipper was supposed to pay ship owners 2.5 trillion won ($2.17 billion) in charter fees over the next three-and-a-half years, but that amount has been reduced by 530 billion won. Half of that discount will be paid to ship owners in HMM stock, and the other half will be paid back in installments over five years beginning in 2022.

“We have secured liquidity for the next three-and-a-half years,” said a spokesman from HMM. “It will stabilize our business operations.”

The charter rate negotiations began in February and are one of the three conditions tied to the approval of HMM’s self-rescue program by the company’s creditors.

While recent declines in the global shipping industry led to an overall fall in charter rates, HMM was chartering ships at 60 percent above market price because its contracts were inked when the industry was on the rise.

The negotiations appeared to be on thin ice when U.K.-based Zodiac Maritime and Singapore’s Eastern Pacific Shipping didn’t show up for the meeting HMM and KDB hosted on May 18 for five main container ship owners that account for 70 percent of the charter fees the shipper owes.

However, KDB confirmed Friday that negotiations with the five ship owners have already concluded.

“We are left to talk with only some of the bulk ship owners but all have basically given us positive signs and we will be inking the discount deal by the end of June without big differences from terms that have already been released,” said one KDB spokesman.

Now, the only task HMM has left to fulfill for approval of its self-rescue plan is entering into a global shipping alliance, in this case one dubbed THE Alliance.

“Our participation has been delayed due to concerns about the normalization of our company, but as we have cleared up debt adjustment with our individual bondholders and also finalized charter rate negotiations, chances are bright,” a spokesman from HMM said. “We have until September to join the alliance since the U.S. Federal Maritime Commission gives final approval then.”

If all conditions for the self-rescue plan are met, the company’s creditors will make a total 1.39 trillion won in debt adjustments including a debt-equity swap of 683.9 billion won.

The plan also includes capital reduction without a refund for HMM’s largest shareholder, Hyundai Group Chairwoman Hyun Jeong-eun, which effectively reduces her stake from 22.6 percent to 4 percent, thus giving control of the shipper over to the creditors.

Hyundai Group had sold Hyundai Securities and injected 1.2 trillion won into HMM, while Hyun Jeong-eun put up 30 billion won of her own private assets.