Some retail districts lose as others gain

Some retail districts lose as others gain 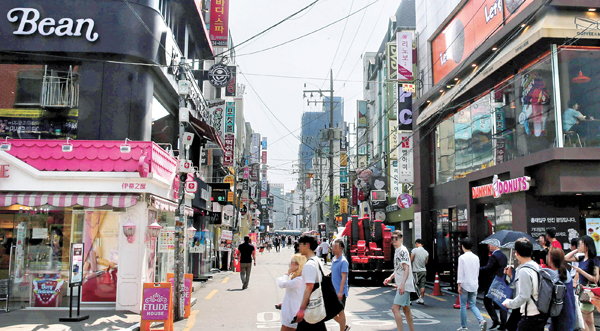 The commercial area near exit 9 of Hongik University Station in Seoul. Commercial areas in Hongdae have seen their gwonrigeum (premium payment) drop to its lowest in eight years, as the area loses customers because of an influx of franchises that have taken away Hongdae’s unique culture and atmosphere. Instead, neighborhoods in nearby Sinchon are enjoying an increase in business, thanks to small shops that made Hongdae unique relocating there because of lower rent. [KANG JEONG-HYUN]

Ms. Han, a 42-year-old owner of a handmade accessory shop near the entrance of Hongik University in western Seoul, has been in business for 10 years. Last year, she was forced to relocate to nearby Sinchon after a famous cosmetics company offered her landlord a monthly rent that was 30 percent higher.

Properties in Sinchon were cheaper, and the area has been enjoying a growing influx of customers.

“I couldn’t move too far because I have a customer base in the area,” Han said, “and I thought of Sinchon as a place where I can do business because there aren’t too many major stores around yet.”

Mr. Hwang, 39, has been a patron of Samcheong-dong in Jongno District, central Seoul, since the early 2000s because of its uniquely traditional atmosphere. He visited the neighborhood on a weekly basis. 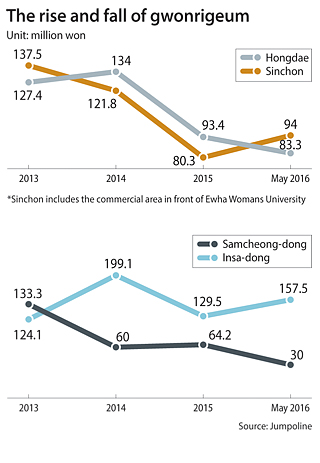 “There’s no reason to go to Samcheong-dong just to get franchise coffee or meals that you can get anywhere else,” Hwang said.

Certain commercial areas in Seoul, including Hongdae and Samcheong-dong, have been losing their appeal as major franchises have moved in, robbing them of their former charm.

As a result, some neighborhoods near these once-popular destinations are enjoying newfound popularity.

Hongdae’s commercial area started to see a sharp increase of Japanese and Chinese tourists in the late 2000s but started to lose its uniqueness and appeal after franchises moved in. Large stores offered landlords higher rents, and small distinctive stores were squeezed out.

According to Jumpoline, a realtor specializing in commercial space, the payment known as gwonrigeum in Korea for an average store in Hongdae as of the end of May was 83.3 million won ($71,400), an 11 percent drop since the beginning of this year. This is the lowest since such statistics were compiled in 2008.

Gwonrigeum is a premium payment that the new tenant of a commercial space gives to the earlier tenant to inherit the earlier business’ reputation and customers. The price of the premium goes up if the store is located in a popular area and if the previous store thrived.

While the premium payment has fallen, monthly rents for stores in Hongdae continued to rise for six consecutive years to 110,000 won per 3.3 square meters (35.5 square foot).

A tenant of a 99-square-meter store in Hongdae would have to pay the landlord 3.3 million won a month.

A drop in gwonrigeum indicates that business isn’t too good or that the neighborhood is losing customers.

“Gwonrigeum is an indicator showing how well a business is doing,” said Kwon Kang-soo, an executive at the Korea Establishment Realty Agent.

In contrast to Hongdae, nearby commercial areas in Sinchon are seeing their gwonrigeum rise. During the same period, the gwonrigeum in the area rose 15 percent to an average of 94 million won. This is largely because the buildings along the main Sinchon commercial street have been rebuilt, and the street itself has been partly pedestrianized.

“Among Chinese tourists, Myeong-dong has become part of the standard tour route where they buy brand-name products like cosmetics, while Sinchon is the go-to place for buying clothes,” said Yeom Jeong-oh, head of the commercial business analysis team at Jumpoline. “And the number of Koreans in their 40s and 50s, who are visiting Sinchon to reminisce about their years as college students, has increased.”

Samcheong-dong is another unique commercial district that lost its appeal after a large numbers of franchise stores moved in.

This year alone, the neighborhood’s gwonrigeum has fallen 53 percent to an average 30 million won. However, monthly rent jumped 25 percent during the same period to 99,664 won for 3.3 square meters.

But nearby Insa-dong is regaining its old glory. The gwonrigeum in Insa-dong has risen 17 percent since the beginning of this year to 157.5 million won.

The Jongno District government is managing Insa-dong in a way that major franchise stores don’t take over recklessly.

“Down the line, another problem will come when major stores start closing down because they see their profits shrinking,” said Lim Chae-woo, a real estate expert at KB Kookmin Bank.