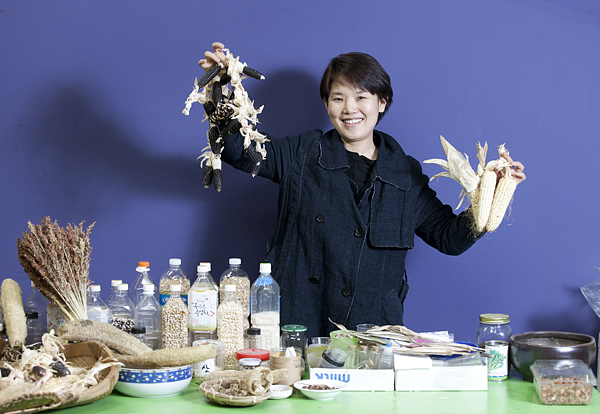 “We don’t simply teach how to cook but also the values behind cooking,” says Han Young-mi, the head of Young Chef School, an alternative cooking school. [KWON HYUK-JAE]

An alternative cooking school in Yeongdeunpo District, western Seoul, not only teaches students how to cook but also what it takes to live an independent life.

“Cooking is an excellent tool for an education that uses all five senses,” said Han Young-mi, 46, the head of Young Chef School. Founded in 2010, the school selects about 10 students each year who wish to pursue cooking-related jobs and then provides them with two years of tuition-free cooking courses.

Students also take classes in humanitarian studies and management and learn how to grow the ingredients they will need. Unlike ordinary schools or private academies, the goal of the school is not merely to help its graduates secure good jobs but to teach them how to live an independent life through cooking.

In their first year, students get to cook for a cafeteria at the Seoul Youth Factory for Alternative Culture, also called the Haja Center. In their second year, students go outside the school to work as interns.

Instead of referring to one another by their actual names, students and teachers call each other by pseudonyms that they chose for themselves. For instance, one of the students, Han Hyun-jeong, goes by the name “Lime,” while another, Oh Dae-gul, is known as “Oning,” and yet another, Lee Jin-seok, goes by “Swings.”

“Calling one another ‘teacher’ or ‘student’ creates boundaries,” said Han, whose pseudonym is “Grace.”

“In such a relationship, one cannot be creative, so that’s why we use nicknames,” she added.

About 70 students have graduated from the school so far, mostly orphans or children whose parents were separated.

“I applied to the school because I like to cook,” said Sohn Sung-hun, also called “He-i,” who is the sixth graduate from the school. “Through meeting new people and experiencing different things, I not only learned cooking techniques but the bigger meaning and values behind it.”

Han, who graduated from the department of sculpture at Sungshin Women’s University, initially wanted to become a curator and has organized several art gallery exhibitions. She joined the Haja Center in 1999 after being introduced to it by an acquaintance. According to Han, as she began interacting with the children and became closer to them, she decided she wanted to do something helpful for them.

“In one class, students had to present potential business ideas,” said Han. “One of the children presented a social business plan to help senior adults who live by themselves.

“When I feel like my cooking class leads to slight changes in the world, that’s when I feel the most fulfilled.”