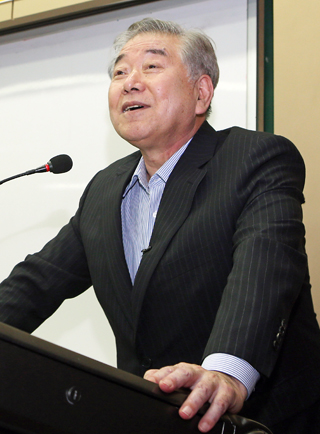 When the time came for Moon Chung-in to deliver his last lecture this week before retiring after 35 years of teaching political science at Yonsei University, he rose to the lectern like a champion runner taking the middle podium after a race.

Moon has authored around 70 books, had 40 research papers listed on the Social Sciences Citation Index and worked as chairman of the Presidential Committee on Northeast Asian Cooperation Initiative, a Cabinet-level post.

At age 65, this professor at one of Korea’s most elite higher education institutions is a genuine celebrity, most noted in the political circle for his liberal views toward North Korea.

But as Moon stood in front of 150 people packed into a 100-person lecture hall at the university on Tuesday, filled with reporters, students and his most avid advocates, the beloved professor admitted he was not all too satisfied with his career.

“I’m a failed professor,” he said, prompting a buzz in the crowd.

“Firstly, I haven’t really created a ‘masterpiece’ as a scholar,” he said, “given my failure to settle down on something and set my mind on to it. Secondly, I accustomed myself to producing what was ordered, instead of being guided by my will.”

Lastly, the professor confided, he lacked a sense of time management.

Moon, who spent half of his hour-long lecture answering questions from the crowd, was at one point asked whether he wished to work for the government any longer.

“Former President Roh Moo-hyun personally requested that I take on double roles as chairman of the Presidential Committee on Northeast Asian Cooperation Initiative and head of the National Security Office,” Moon replied.

“I told him: ‘It’s hard enough being the committee chairman. Would you want to ruin the country?’”

A while later, a reporter asked Moon to address an old rumor that former President Roh intended to appoint him as minister of unification but was discouraged after finding out he had turned to Islam.

Moon denied this, saying he grew close to a Muslim Indonesian friend after being discharged from the military. After learning about the friend’s religious practices, Moon had lived a Muslim lifestyle for several years, but later drifted away from it while working in the United States.

When asked about his current thoughts on the Ministry of Foreign Affairs, Moon said he thinks of the government body as the “ministry of sanctions.”

“It’s important that [Seoul] open discussion channels with North Korea,” Moon said, adding that “at the center [of those efforts] should be the South Korean government, not America or China.”

Moon will retire this semester from his role as professor, but will continue to teach non-major general education courses until 2021 as an emeritus professor at the university’s Songdo campus in Incheon.

The scholar vowed to write one book each year for a decade, and research the fields of Central Asian politics and South Korean national security, diplomacy and intelligence services.