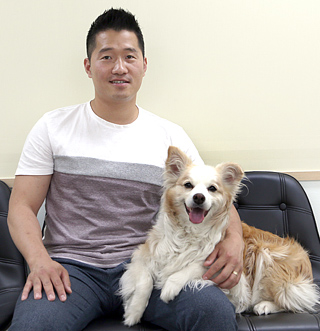 Kang Hyeong-uk, also known as Hunter Kang, is a renowned dog trainer who never scolds dogs because, as he says on his dog training program on EBS, “There is no such thing as a bad dog.”

People come to him with issues such as, “The dog keeps barking every time our baby cries,” or “My dog bites me!” but Hunter Kang manages to come up with answers every week - and he never blames the dog. His style of training has sparked much online discussion.

On May 31, when the JoongAng Ilbo visited Bodeum Company in Jamwon-dong, Seocho District, southern Seoul, not a single dog was seen inside the clinic.

“Unlike other dog training centers,” Kang says, “we don’t offer programs for owners to leave their dogs alone at our center. We require owners to come with their dogs so they can walk them and take classes with them.”

Rather than enter high school, Kang began work at a dog training center and is now in his 18th year in the industry.

“If owners are tired of dogs barking at them,” he advises, “they should stop scolding them and think about why they are barking in the first place. If owners change their views just a little bit, a lot could change.”

He refers to a dog owner he recently met.

“One owner came and said she wants her dog not to bite her sons. So I went to her house to see her two sons, 8 and 9 years old, pulling the dog by each end as if they were playing tug-of-war. She just needs to teach her children how to treat their dog.”

On the issue of the so-called dog factories, scenes of animal abuse where pets are artificially produced, he says, “Customers should avoid pet shops if they want to solve that problem.”

Kang himself grew up watching his father operate one of those dog factories.

He once asked his father, “Why do you breed dogs like this?”

“Dogs should not be a means to earn money,” he says. “There needs to be a new ecosystem in the pet industry so people can adopt dogs that are born in good care by loving parents, or dogs that are homeless.”

To this end, Kang believes people who live alone should not adopt dogs. He even released a book titled “You Should Not Keep a Dog,” in which he argues that if you are not ready for a dog, you should not take one in.

“In Europe, there is a system in place for interviewing potential dog owners, and agencies never let dogs fall into the hands of individuals who may leave their pets alone for most of the day,” Kang says. “I’m thinking of starting a campaign that could further change views toward pets in Korea.”