Raiders descend on many parts of the Lotte Group

Raiders descend on many parts of the Lotte Group 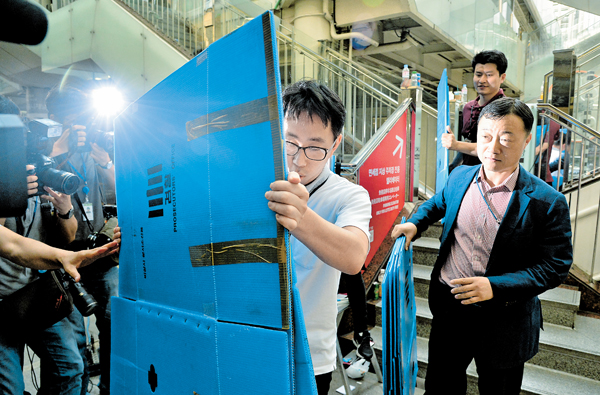 Prosecutors with empty boxes rush to the Lotte Group headquarters in Jung District, central Seoul, on Friday to raid the retail giant on suspicions of corporate embezzlement and business malpractices as camera crews capture the moment. Investigators packed the boxes with materials related to the probe. [NEWSIS]

Nearly 200 investigators from the Supreme Prosecutors’ Office were mobilized on Friday for a massive raid on retail giant Lotte Group in a corporate embezzlement and business malpractice case.

The raids of Lotte headquarters, affiliated companies and executives' homes were launched at 8 a.m. and with overwhelming media attention. They were continuing as of press time.

The key focus of the investigation, according to the authorities, is whether Lotte Group created slush funds through its financial transactions of its affiliates, and if so, where the money was funneled and to whom.

The prosecution suspects that money was pocketed by Lotte executives.

Shin Kyuk-ho, the 93-year-old founder of the group, saw his main office on the 34th floor of the Lotte Hotel building in Jung District, central Seoul, raided. So was the residence of his second-oldest son, Lotte Chairman Shin Dong-bin, 61, in Pyeongchang-dong, central Seoul.

Prosecutors said they would mainly collect account books, hard drives and any other data about transactional information among Lotte affiliates and the conglomerate’s shareholding structure.

Aside from the embezzlement accusation, the authority also vowed to look into whether Lotte Group lobbied political and military circles during the Lee Myung-bak administration to win a construction license for its Lotte World Tower, which is still being built in Jamsil-dong, southern Seoul.

Korea’s tallest skyscraper, at 123 stories, has been controversial since the founder introduced the idea in 1994 to erect a gigantic building next to Lotte World, the country’s biggest indoor and outdoor amusement park.

For more than a decade, the government and Korean Air Force opposed the tower out of fears that aircraft taking off from the Seoul Air Base in Seongnam, Gyeonggi, could collide with it.

In 2007, when Roh Moo-hyun was president, the government delayed the project and limited the structure’s height to 203 meters (666 feet).

In 2009, during Lee Myung-bak’s presidency, the project was finally approved when Lotte agreed to fund the rebuilding of the Air Force runway to alter its angle, prompting local skeptics to wonder whether the company had offered kickbacks during that process.

The investigation is a new woe for the group, which is coming off a terrible year.

The country’s fifth-largest conglomerate received the worst possible PR last year when Shin Dong-joo, the eldest son of founder Shin Kyuk-ho, attempted a coup against his younger brother Shin Dong-bin, chairman of Lotte Group, which led to a change in the company’s corporate structure.

Several weeks ago, prosecutors raided Lotte’s duty-free departments and the home of Shin Young-ja, 74, executive director of the Lotte Scholarship Foundation and daughter of Shin Kyuk-ho, on allegations that she was bribed by the CEO of Nature Republic in exchange for putting its cosmetic shops in Lotte’s duty-free stores.