Another week, another big win for Mariners’ Lee

Another week, another big win for Mariners’ Lee 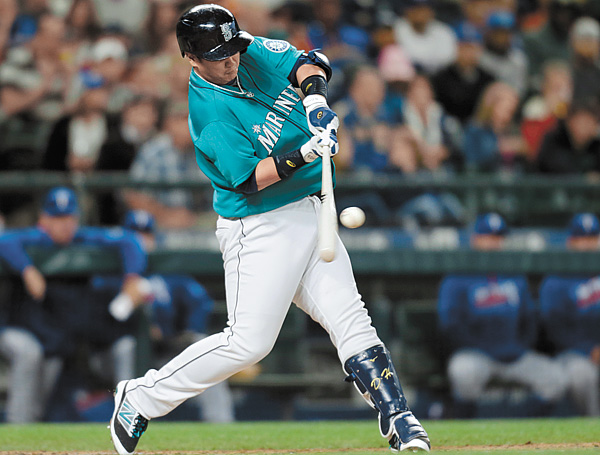 Lee Dae-ho sends off a three-run homer against the Texas Rangers on Saturday. [AP/NEWSIS]

Lee Dae-ho of the Seattle Mariners had another big moment over the weekend with a multi-homer game on Saturday to boost his team over the Texas Rangers 7-5. Lee also became fifth Korean big leaguer to belt more than 10 home runs in a single season in Major League Baseball (MLB) history.

First baseman Lee, who batted fifth during Saturday’s game at Safeco Field in Seattle, cranked his first homer of the game during his first at-bat in the bottom of the second inning, sending Rangers starting pitcher Derek Holland’s 92-mile-per-hour sinker over the center fence. His solo homer gave the Mariners an early lead over the Rangers.

The 33-year-old rookie drove deep once more during his next at-bat in the bottom of the fourth when he belted a three-run home run. Holland, who conceded two consecutive home runs to the Korean slugger, was left dumbfounded as Lee rounded the bases after his home run that brought home Robinson Cano from second base and Nelson Cruz from first. This was Lee’s fourth three-run home run of the season.

“Offensively, it’s the big boy,” said manager Scott Servais in an interview featured at the MLB.com. “It’s Dae-Ho Lee’s night. Unbelievable what he’s done. I look up and he’s got 10 home runs. That’s not easy to do in this ballpark ... Obviously he gave us a big lift tonight.” 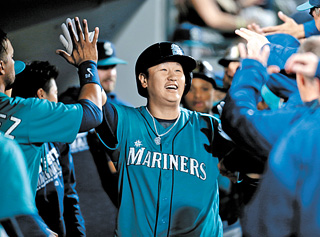 Lee Dae-ho of the Seattle Mariners is greeted by his teammates in the dug out after his three-run homer on Saturday. [AP/NEWSIS]

Lee’s teammate Hisashi Iwakuma, who played against him in the past in the Japanese league, vouches for Lee’s slugging power.

“I faced him before in Japan. He’s a very tough out,” said Iwakuma, who pitched for five innings and added a win Saturday. “He knows how to make contact. He has a very good approach after two strikes. You just have to paint the black and hopefully he’ll miss”

Lee, who initially joined the Mariners before the season began with a minor league contract, attended the team’s spring camp on an invitation in March. His performance on the plate and in the field compelled the Mariners’ managing staff to keep Lee in the big league and included him in the team’s roster for the opening game before the regular season began in April.

Lee has been faring well since, collecting 10 homers, 24 runs batted in and 16 runs-scored during 110 at-bats as of Sunday. He’s been hitting at least one home run at every 11th at-bat.

His first big moment came in April when Lee belted a walk-off home run to snap the Mariners’ five-game skid over the Rangers. His epic pinch hit in the bottom of the 10th on April 14 made Lee the first rookie for the Mariners to drive a pinch-hit game-ending home run.

The 33-year-old big man hit 323 home runs over the 11 years he played in Korea and Japan before joining the Major League, developing a reputation as a impressive slugger that he has carried through to the majors.

Lee’s 10 homers through the first 61 games are tied for the third-most among rookies in Mariners’ history, according to MLB.com.

Lee also became the fifth Korean baseball player in MLB history to smack more than 10 home runs in one season. The feat was previous accomplished by the now-retired Choi Hee-seop of the Florida Marlins, Choo Shin-soo of the Rangers, Kang Jung-ho of the Pittsburgh Pirates and Park Byung-ho of Minnesota Twins.

Lee’s home run is proving to be a positive signal for the Mariners as well. Out of the eight games in which Lee has hit at least one home run, the Mariners won seven and lost one.

Despite his performance on Saturday, Lee was excluded from the starting roster for Sunday’s game against the Rangers because of the platoon system Mariners manager Scott Servais has rigidly adopted.

Lee has been platooning with lefty Adam Lind on first base and often found himself on the first base in Lind’s stead against southpaws.

“All of Korea is probably not happy with me,” said Servais about not starting Lee.

During Sunday’s game, Lee stepped into the stadium as a pinch hitter, replacing Lind at the bottom of the 10th and singled during his first at-bat. The Mariners couldn’t hold on to their lead from the fifth inning and gave out two runs in the ninth and tenth to allow the Rangers to take home a 2-1 victory.