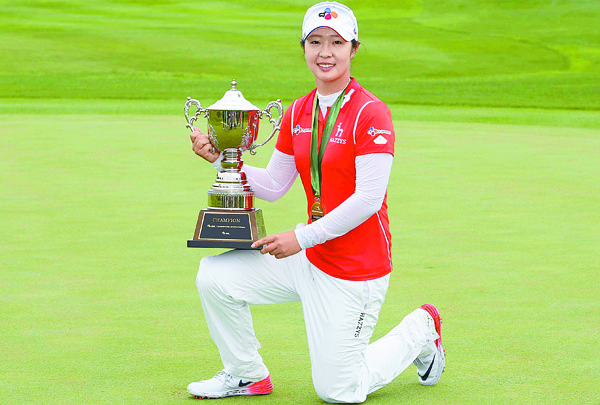 Park Ji-young poses for photo with her trophy after winning the 10th S-Oil Champions Invitational at the Elysian Jeju on Sunday. This was the first KLPGA trophy for second-year pro Park. [KLPGA]

Second-year pro Park started the event on Friday tied at fourth. After shooting the first round 6-under, she quickly rose to the top during the next round on Saturday by going 5-under to aggregate 11-under before the final round.

During the third round on Sunday, Park struggled against Ko Jin-young and Jang Su-yeon, who remained closely behind Park, to eventually finish the round 6-under. She wrapped up the entire tour 17-under, four strokes ahead of Ko, who finished the tournament in second place.

Jang was an especially tough opponent for Park to shake off. Starting the third round one stroke behind Park, Jang eventually matched her by the 13th hole on Sunday to tie for first with 15-under score.

The only blemish on Park’s otherwise perfect performance came at the 12th hole. At the 155-meter-long (170 yards) par-3 hole, she teed off with a seven iron and landed the ball at the right corner of the green. During her birdie attempt, the ball went across the green past the hole and she hoped to finish the hole at par.

However, her par attempt was especially disappointing for Park as it deflected off the hole. Park came out of the hole with her only bogey of the day, which also gave Jang a chance to match her on the leaderboard.

But the 14th hole was the game changer, where then co-leader Jang quickly collapsed after roughing the tee shot to out of bounds. Park’s driver, in comparison, landed right on the fairway. While Park parred the hole, Jang double bogeyed the hole to fall two strokes behind Park. Jang eventually finished the event tied fourth at 11-under.

The move that essentially decided Park’s victory came at the par-5 16th hole with a bold putting attempt, which she sent downhill from about halfway across the green. Her daring play gave park her seventh birdie of the round.

After pocketing her final birdie of the day, Park proceeded to par the remaining 17th and 18th holes to cumulate 17-under 199 and sealed her first career win. Park’s score from the event over the weekend matches the previous tournament record.

By winning the 10th S-Oil Champions Invitational, Park took home 140 million won ($119,466) and is expected to climb to fifth in the KLPGA money rankings.

Park is also the sixth golfer this season to claim her first career win. The last golfer to accomplish the feat was Park Seong-weon, who topped the Lotte Cantata Ladies Open that occurred from June 3 to June 5.

The 20-year-old was admitted to the KLPGA in May 2014 and made her top tournament debut in 2015 after spending 2014 in the Dream Tour and Jump Tour, secondary and tertiary tournaments of the KLPGA.

She finished in the top-10 on four different occasions in 2015 and received the 2015 Rookie of the Year award.

Park’s peak performance this season before last weekend came in May, when she finished the Kyochon Honey Ladies Open tied at fourth after shooting 2-under 214. She then continued a week later to finish fifth at the 2016 NH Investment & Securities Ladies Championship.

Appearing in 11 events before the S-Oil Champions Invitational, she has finished within top 10 four times this season.

“I was nervous,” said Park about how it felt to bogey the 12th hole during the interview after her win. “But I regained my focus on the 13th hole. I just told myself to play my game.”

When asked about how it felt to claim her first trophy, Park answered, “It feels good, but I am also a little startled.”

“It hasn’t hit me yet,” she added sounding elated.