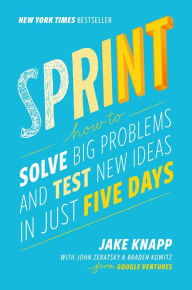 “Sprint offers a transformative formula for testing ideas that works whether you’re at a startup or a large organization. Within five days, you’ll move from idea to prototype to decision, saving you and your team countless hours and countless dollars. A must read for entrepreneurs of all stripes.” - Eric Ries, author of “The Lean Startup”

From three partners at Google Ventures, a unique five-day process for solving tough problems, proven at more than a hundred companies.

Entrepreneurs and leaders face big questions every day: What’s the most important place to focus your effort, and how do you start? What will your idea look like in real life? How many meetings and discussions does it take before you can be sure you have the right solution? Now there’s a surefire way to answer these important questions: the sprint. Designer Jake Knapp created the five-day process at Google, where sprints were used on everything from Google Search to Google X. He joined Braden Kowitz and John Zeratsky at Google Ventures, and together they have completed more than a hundred sprints with companies in mobile, e-commerce, and more. 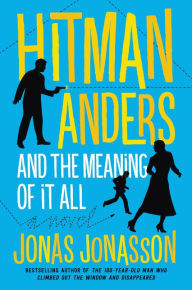 Hitman Anders and the Meaning of It All

From the author of the international best-seller “The 100-Year-Old-Man Who Climbed Out the Window and Disappeared,” a brilliant satirical novel set in modern Sweden - a story of idealism and fanaticism, gangsters and entrepreneurs, sensationalism and spirituality, that explores the values that matter in contemporary life.

In a former brothel turned low-rent hotel, the lives of three unusual strangers - a former female priest, recently fired from her church; the ruined grandson of an ex-millionaire working as a receptionist; and Killer-Anders, a murderer newly released from prison - accidently collide with darkly hilarious results.

Seeing a lucrative opportunity in Killer-Anders, the unlikely trio form an unusual new business. The Priest and The Receptionist will handle strategy and public relations, and coordinate Killer-Anders’s “missions.” Using the media’s obsessive need for sensational, headline-making stories to advertise their talent’s superb “skill,” they quickly build a clientele of rich Swedish gangsters. Suddenly, they’re making an altogether different kind of killing of their own.

But when Killer-Anders begins asking deeper questions about purpose and meaning, his curiosity leads him to an unexpected discovery: he finds Jesus. Desperate to save the money machine they’ve built, The Priest and The Receptionist devise an audacious plan utilizing Killer-Anders’s newfound and decidedly fervent faith.

Mischievous yet big-hearted, filled with Jonasson’s trenchant humor and delightful twists, “Hitman Anders and the Meaning of It All” is a delightful comic adventure that reminds us it’s never too late to start over - and to discover what truly matters. 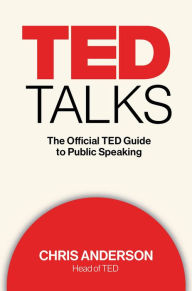 Since taking over TED in the early 2000s, Chris Anderson has shown how carefully crafted short talks can be the key to unlocking empathy, stirring excitement, spreading knowledge, and promoting a shared dream. Done right, a talk can electrify a room and transform an audience’s worldview. Done right, a talk is more powerful than anything in written form. This book explains how the miracle of powerful public speaking is achieved, and equips you to give it your best shot. There is no set formula; no two talks should be the same. The goal is for you to give the talk that only you can give. But don’t be intimidated. You may find it more natural than you think. Chris Anderson has worked behind the scenes with all the TED speakers who have inspired us the most, and here he shares insights from such favorites as Sir Ken Robinson, Amy Cuddy, Bill Gates, Elizabeth Gilbert, Salman Khan, Dan Gilbert, Mary Roach, Matt Ridley, and dozens more - everything from how to craft your talk’s content to how you can be most effective on stage. This is the 21st-century’s new manual for truly effective communication and it is a must-read for anyone who is ready to create impact with their ideas.