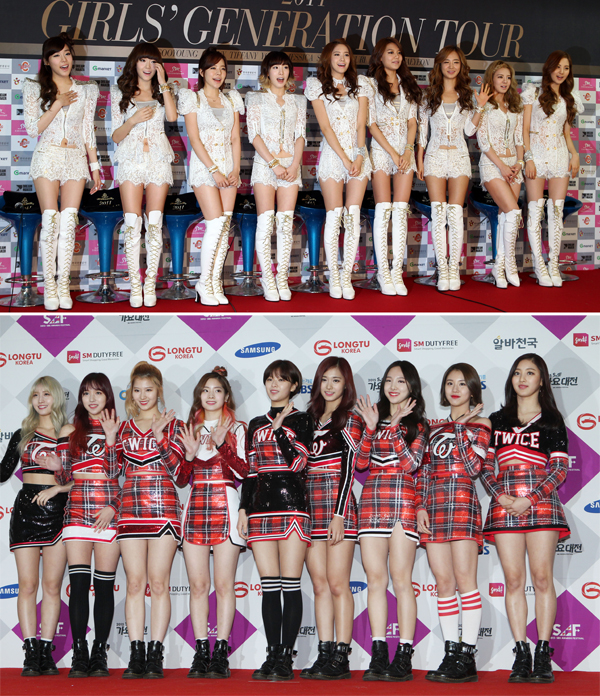 Above: The nation’s A-list female act Girls’ Generation, which entered the music scene in 2007. Below: Newly rising girl group Twice, which has already sold over hundred thousand copies of their latest album “Cheer Up.” [JOONGANG ILBO]

There was a notable moment on the SBS music program “Inkigayo” that aired on May 22. The first place award was given to the K-pop girl group Twice.

Entertainment industry insiders say that a shift in K-pop girl groups from the second generation to the third has occurred.

The big names of second generation girl groups, which debuted in the late 2000s, are Girls’ Generation, Wonder Girls and Kara. Members of these groups, who used to rule the entertainment industry, now seem to be handing the baton to newly rising third generation female bands such as Twice, GFriend and Mamamoo, all of whom debuted in the mid 2010s.

The generational shift is illustrated on music programs such as Mnet’s “M Countdown” and KBS2’s “Music Bank,” where newly rising girl groups are dominant. In addition, Twice sold over a hundred thousand copies of its latest album “Cheer Up.” Considering the fact that Girls’ Generation was the only female group that sold more than a hundred thousand albums last year, Twice’s achievement is notable in that they accomplished it within a year of their debut.

One reason for such a shift is the expiration of the second generation girl groups’ contracts with their entertainment companies. A multitude second generation members’ contracts, which usually last seven years, have either terminated or are close to termination. An So-hee from Wonder Girls, for example, left the group in 2013 after her contract expired with JYP Entertainment. Other singers that left their groups are Jia from Miss A last month and Sulli from f(x) in August 2015.

Another reason is fickle fans. Although a generation shift among boy groups has also begun, the trend is stronger in girl groups because “fandom of male K-pop bands usually last longer than those of female bands,” according to cultural critic Ha Jae-guen. “Fans of girl acts tend to respond more actively towards new bands.”

The new girl groups seem to be more prepared and talented than their predecessors. According to culture critic Lee Dong-yeon, one of the major differences between the first, second and the third generation girl groups is an acceleration of talent as time goes by.

“When the first generation female bands [that debuted in the 1990s] were active, they were often loved by the public regardless of their singing and dancing abilities. For the second generation girl groups, however, they had to show high dancing and singing skills to earn the public’s love. Such expectations are even higher for the third generation, who underwent hard core training and have been trained to be good at almost everything including dancing, singing and rapping.”

Lee added that even though each individual of the third generation K-pop girl group is outstanding, their music is still highly similar to other groups because the music concepts are determined by their entertainment companies.