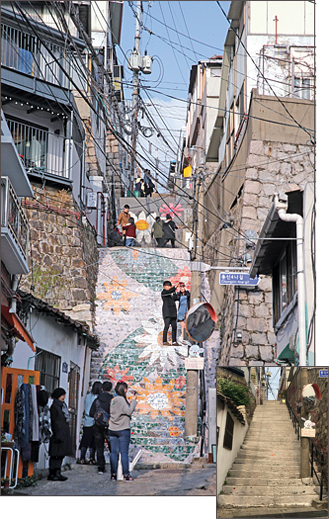 The popular stairway murals of Ihwa Mural Village in Jongno District, central Seoul, have been painted over by village residents, according to the Hyehwa Police Station. The incident sheds light on the problems village residents experience as a result of an influx of visitors. [JOONGANG ILBO, KIM HYE-JUN]

The small village of Dongpirang in the southern coastal city of Tongyeong, South Gyeongsang, could have disappeared were it not for the beautiful murals on the walls of the single-story houses of the town.

The area, located behind a fish market, was initially settled by low-income laborers during the Japanese colonial period. The shantytown was set to be demolished, but in 2006, thanks to the efforts of residents, a civic group and the local government, the village was revitalized and now has roughly 3,000 visitors a day on average.

This is the very first example where murals stimulated the growth of a town. The civic group Tongyeong 21 resisted the government’s plan to demolish the town and rather suggested revitalizing the area through a project to paint murals on the walls. About 70 artists were chosen to create the murals from a competition the group organized.

Witnessing the town’s success, other mural villages have been created across the country in an effort to revitalize the declining towns, such as Ihwa Mural Village in Ihwa-dong, Jongno District, central Seoul.

The Ministry of Culture, Sports and Tourism carried out a plan called “Art in City Project” in 2006, with the aim of improving the visual aspect of the isolated town. With beautiful murals painted by 70 artists, it became a representative tourist destination for those who visit the central Seoul area.

Since then, many local governments have been trying to carry out similar projects in hopes of revitalizing areas in need of development. But not all of these efforts seem to turn out as successfully as Dongpirang Village.

While the murals may appear beautiful, experts say they can have a downside.

“Many seem to perceive painting murals as equal to revitalization, while it could actually lead to inconveniences for residents,” said Kim Sei-yong, an urban design professor at Korea University.

Ihwa Mural Village, an area with mostly elderly residents, is no longer a quiet, isolated neighborhood. Crowds of tourists wandered around the village on May 23 when this reporter visited, looking for the best spots to snap pictures.

But a group of tourists from Hong Kong who were visiting the village said it fell short of their expectations. “I think a lot of the murals have disappeared. This is not what I saw on the internet,” one visitor said. “I guess it’s not the right time to come here.”

Indeed, two of the village’s representative artworks on the stairways disappeared in April. A stairway that used to bear images of sunflowers was painted over in gray by three residents on April 15. The following week, on April 24, two other residents went on to paint over another stairway, which had been covered with a mural of carp.

According to the Hyehwa Police Station, the residents erased the murals because of the excessive noise and trash that the visitors often bring to the village. They decided to resolve the problem on their own when nothing improved after they lodged complaints with the local government several times.

Tourists are often unaware of the fact that residents are actually living just steps away from where they are posing for photos. In fact, there were about 100 middle school students touring the village that same day as part of a school trip. The students spoke to each other loudly, and the teachers made no effort to restrain them. Two elderly women stood on a corner, holding up signs requesting silence, but they seemingly had no effect on the youngsters.

This incident points to the root of the conflict: a lack of consideration for village residents, who should actually be the biggest beneficiaries of the revitalization project. Local governments that initiate these projects seem to be putting more focus on increasing tourism than substantially increasing residents’ quality of life.

“Overall land and housing prices have gone up,” said Kim Young-hee, 55, the owner of a store at one corner of the village.

Although landlords may take advantage of the increased land values, others do not enjoy the increased popularity of the neighborhood.

“Landowners may benefit from it, but not actual residents. This is how gentrification occurs,” Prof. Kim Sei-yong said.

Gentrification is a phenomenon in which an area experiences a large influx of capital, which displaces actual residents or individual business owners. Garosu-gil in Sinsa-dong, southern Seoul, is a notable example of gentrification, as small-scale individual shops have disappeared because of increased land prices.

Mural village residents have had to deal with constant noise, unwanted invasions of their privacy and trash that visitors leave behind. Jongno District, however, did not effectively address the problems, even though residents filed complaints with the district office and local police, according to Kim Young-hee, a shop owner in the village.

However, the local government did extend a campaign to address the noise problem at Ihwa Mural Village beginning in April, according to Lee Sung-min, an official from the city tourism division of the Jongno District Office. The campaign was originally implemented in the nearby Bukchon Hanok Village.

Lee explained that two elderly women hold signs from 1 p.m. to 4 p.m. most days. They are paid 200,000 won ($170) each month. The signs they hold let people know that residents are living inside the houses, but the campaign is highly reliant on the voluntary participation of visitors.

“Other than the campaign, there is no other support being done [for the residents],” Lee said.

Unfortunately, other mural villages in Korea are experiencing similar problems.

Gamcheon Culture Village in Saha District, Busan, is another example. The area became a popular place to visit because of the beautiful murals painted there with the support of the Maeulmisul Arts Project, a government-affiliated organization under the Ministry of Culture, Sports and Tourism.

The project was launched in 2009, and according to the Saha District Office, 1.4 million people visited the village in 2015.

To capitalize on the surge in tourism, village residents decided to start selling maps to tour groups that cost about 2,000 won per tourist in January.

“It was done in hopes of using the profits for their community and to induce large groups of tourists not to enter the town at once,” said Jeon Soon-seon, the vice president of the residential body that some residents voluntarily organized in order to improve their quality of life. However, it is not necessary for individual visitors to buy a map.

“This is because residents suffer from the noise that visitors make, and a lack of privacy is also another problem,” Jeon said. “And as soon as large groups of tourists enter the town, they use our public facilities such as restrooms.”

She said the village received no specific support from the local government, so the residents decided to come up with solutions themselves. 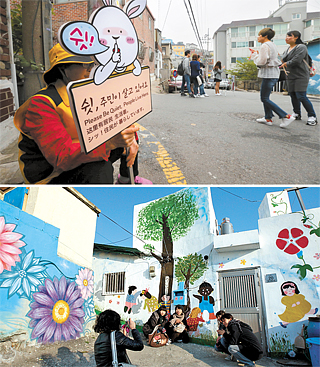 Top: A woman holds up a sign requesting visitors to Ihwa Mural Village in central Seoul to be quiet. The campaign, which started in April, relies on the voluntary participation of visitors. Bottom: Tourists pose for photos in Dongpirang Village in Tongyeong, South Gyeongsang. [JOONGANG ILBO]

Experts point out that village mural projects can become a double-edged sword if adopted without proper understanding of urban revitalization.

“Some local governments seem to consider painting murals as a simple way to revitalize villages,” said Byun Tae-soon of the design policy division of the Seoul Metropolitan Government.

“Our division carries out various arts projects to promote public art, but we don’t carry out mural projects at all,” she said. “This is because murals can become dangerous, as they can turn into an eyesore,” without continuous and proper maintenance, she explained. “The city is starting to recognize the problem [of excessive murals].”

But there is no law to stop any entity from installing murals. A person who works at the city design division of the Jongno District Office, who wished to remain anonymous, pointed out several problems with murals.

“They are often drawn by non-experts,” she said. “There are also cases of complaints made by residents because murals are drawn without their consent in advance.

“Murals need to be repainted every two to three years or taken down, but those who paint them tend to be one-time volunteers,” she continued, explaining that the office cannot provide support for every mural put up in villages, some of which are created by private organizations.

“Recognizing the problem, new legislation to regulate them is in consideration,” she said.

According to Prof. Kim Sei-young, there is a general lack of understanding of urban revitalization.

“Painting murals does not necessarily lead to revitalization of a city,” he said. “Revitalization doesn’t mean ornamenting the towns; rather, it means empowering the areas to function properly again.”

He said that many local governments across Korea have been carrying out plans to “put ornaments” on isolated villages since about 10 years ago.

Nam Jin, a professor of urban revitalization at the University of Seoul, also explained why conflicts occur over murals.

“In some cases, public art can have a positive impact on the revitalization of villages,” Nam said. “However, not all public art leads to positive impacts, especially when there is no consent from the residents.

“Revitalization means to develop the city while preserving its cultural heritage and the residents’ lifestyle, without demolishing it,” he continued. “It is a combination of improving both the hardware and software of a city.”