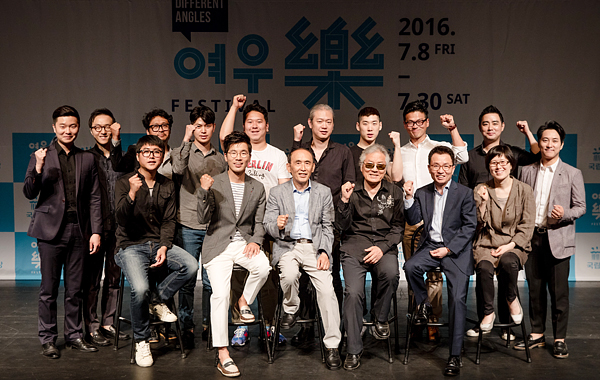 The “Yeowlak Festival” kicks off next month in Seoul, aiming to introduce new interpretations of traditional Korean music, collaborating with jazz musicians, actors and even a chef. [NATIONAL THEATER OF KOREA]

The same music can leave different impressions on each listener. The “Yeowlak Festival” is aiming for just that, inviting not only musicians but actors and even a chef onto the stage to reinterpret Korean traditional music.

Subtitled “Different Angles,” the festival’s 11 performances will be held under four different themes or sections: “Legend,” “Different,” “Discovery” and “Next.”

In the “Legend” category, top musicians will let the audience listen to their rich sounds. Lee Saeng-kang, the daegeum (bamboo flute) master, and jazz pianist Shin Gwan-wong, who pioneered the genre of jazz in Korea, will collaborate.

Actually, they are from the first generation of crossover musicians, who brought the two seemingly disparate genres together about 40 years ago and released an album. The album was sensational then, as they reinterpreted then-popular Korean pop songs.

“Now that I hear the past collaboration album, I think I can do far better now,” Shim said at a press conference last week.

Kim Young-jae, a master in both gayageum (traditional zither) and haegeum (traditional string instrument), will present classic Korean sounds. In his 55-year career, he has engendered renewed interest in traditional music.

The festival was launched by the National Theater of Korea in 2006 with the aim of promoting traditional music. In 2015, famous jazz artist Nah Youn-sun, who mostly performs in France, directed the festival and contributed to raising its profile.

In particular, the festival focuses on how to reinterpret traditional music from various perspectives. The “Different” section features actor Cho Jae-hyun and actress Hwang Suk-jung as well as Yoo Taepyeongyang, an emerging pansori (traditional narrative singing) performer, in a unique performance that combines theater, talk concert and pansori.

Also, maestro Choi Soo-yeol, the assistant conductor of the Seoul Philharmonic Orchestra, will perform with the Classikan Ensemble to blend classical and traditional music.

And Jang Jin-woo, a chef known for his restaurants in Itaewon, central Seoul, is collaborating with musicians to reinterpret “Norumgut,” a type of gut (traditional shaman ritual). He actually majored in traditional music in university, playing the Korean pipe.

The festival will run from July 8-30 at KB Youth Sky Theater, Daloreum Theater and Byulorum Theater, all in Jung District, central Seoul. For more information, visit www.ntok.go.kr or call (02) 2280-4114~6.