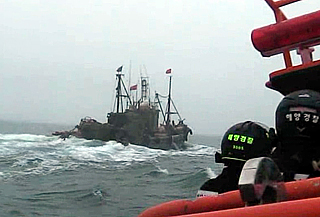 Incheon Coast Guard chase a Chinese fishing vessel to seize it for violating South Korea’s territorial waters off Yeonpyeong Island near the Northern Limit Line in the Yellow Sea, on Saturday. The Chinese vessel blockaded its wheelhouse and tried to flee by sailing north with South Korean Coast Guard officials still on board. [NEWSIS]

A Chinese vessel illegally fishing off Yeonpyeong Island in the Yellow Sea was seized by Incheon Coast Guard - but not before trying to flee with Korean officers still on board.

A 50-ton Chinese boat illegally caught some 45 kilograms (99 pounds) of crab and small fish in waters 8.6 kilometers (5.3 miles) to the south of the Northern Limit Line, the de facto maritime border between the two Koreas, at around 4:40 p.m. Saturday afternoon, according to the Incheon Coast Guard Sunday. This was in violation of Korea’s exclusive economic zone.

During the raid, 14 Korean Coast Guard officers boarded the Chinese fishing vessel to seize it.

But Chinese sailors blockaded the wheelhouse and tried to take off with the Coast Guard officers still on board. They managed to sail around 1 kilometer to the north before control was seized.

This led to the arrest of all seven Chinese sailors on board, who were transported to Incheon.

Had the South Korean Coast Guard crossed over into North Korean waters, it could have given Pyongyang a pretext for some form of retaliation.

This raid was part of a major joint crackdown on illegal Chinese fishing vessels launched Friday by the South Korean Navy’s military police, Coast Guard and United Nations Command around the Han River estuary to the Yellow Sea.

The operation tracked some ten Chinese ships that were said to be illegally fishing in South Korean waters. But the vessels crossed into North Korean waters when they were approached by maritime authorities.

Illegal fishing by Chinese trawlers, which has reduced the catch for Korean fishermen, has been a source of continued diplomatic tension between Seoul and Beijing.

“There was no raid today because there were no Chinese vessels in this area,” said Moon Sang-gyun, spokesman of South Korea’s Ministry of National Defense, on Sunday.

“Some vessels escaped westward but if vessels that are in North Korean territorial waters try to sail south, we will resume the crackdown.”

The Chinese vessels are catching clams, shrimp and mullet in waters near North Korea’s South Hwanghae Province, but Pyongyang does not appear to be cracking down on them, according to South Korean military officials.

North Korea is thought to have sold fishing rights to Chinese fishermen, though there has been no official confirmation.

“North Korea lacks fuel and their nets and fishing vessels are old, so they cannot fish properly and have been selling fishing rights to China,” a South Korean government official told the JoongAng Ilbo Sunday.

“It is likely that they are accepting fees from such illegal fishing vessels.”

Chinese fishermen use closely woven nets that sweep up all fish unlike South Korean fishermen who only catch fish that reach a certain size, leaving the waters depleted.