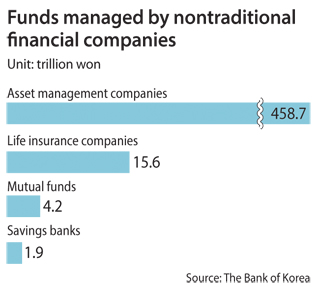 With the key interest rate plunging to a record-low 1.25 percent, people are flocking to alternative financial institutions in search of savings products with higher returns.

Funds managed by institutions like savings banks, asset management companies and credit cooperatives reached 2,022 trillion won ($1.72 trillion) as of April, the highest since the Bank of Korea began keeping records in 1993, according to the central bank on Monday.

That increase correlates with the central bank’s lowering of the key interest rate, which dipped below 3 percent in 2012 and continued to sink through the 1 percent range from last year.

Alternative financial institutions offer higher interest rates, but their products are considered riskier than those offered by commercial banks.

By type, funds managed by asset management companies amounted to 458.7 trillion won as of April, a 7.8 percent increase year on year.

Along with the increase in funds managed by nontraditional financial institutions, loans from those same bodies are also on the rise.

In the first quarter, the nonbanking sector lent 15 trillion won, while banks only offered 5.6 trillion won.

In light of the companies’ growing popularity, the country’s financial watchdog is working to keep consumers informed of potential risks while stepping up monitoring efforts.

The Financial Supervisory Service earlier this month ordered local savings banks to enhance their lending information database systems by September and make all documents fully electronic so that borrowing records can be updated constantly.

The Financial Supervisory Service wants other companies to be able to check lending records as soon as possible to keep borrowers with poor credit histories from taking out loans from multiple institutions.