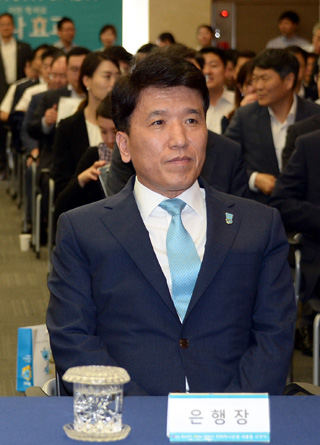 KEB Hana Bank said on Monday that it has completed integration of the IT systems of the former Korea Exchange Bank (KEB) and Hana Bank.

The bank said it has established the “industry’s best IT banking system” and held a ceremony to mark the new start of the bank under the slogan “One Bank, New Start” at its headquarters in central Seoul.

“The successful integration of the IT systems has paved the way for a real ‘One Bank,’” Ham Young-joo, CEO of KEB Hana Bank, said at the ceremony. “We will see the tangible outcomes of the incorporation and strengthen sales competitiveness to become a leading bank in both size and quality.”

Although KEB and Hana Bank announced their merger on Sept. 1, 2015, their IT systems were not integrated at the time. Customers couldn’t use each bank’s services interchangeably until last week.

From now on, customers can visit all 933 KEB Hana Bank branches across the nation and still use their old bank accounts and cards.

The integration means KEB Hana Bank can reduce up to 150 billion won ($127.8 million) in system maintenance costs over the next three years, it said.

Within the year, the bank will shut down or integrate 47 bank branches that are considered to be overlapping with those nearby.

“We hope KEB Hana Bank will create new growth engines that can lead the market by operating the cutting-edge IT system,” said Zhin Woong-seob, governor of the Financial Supervisory Service.

The bank will next focus on accelerating overseas expansion.

KEB-Hana Bank aims to set up two local subsidiaries in China and six bank branches in Indonesia by this year. It will also turn its Mexico office into a corporation and open a branch in India.

The bank says it will also pursue the acquisition of a savings bank in the Philippines.