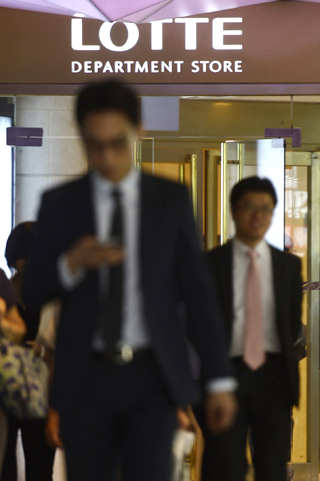 Lotte’s main department store in downtown Seoul on Monday. The retail giant has decided to cancel its initial public offering (IPO) scheduled next month, which could have been Korea’s largest IPO, after prosecutors raided the offices on Friday. [OH SANG-MIN]

Hotel Lotte’s plan to go public has been withdrawn amid rekindled conflicts between the brothers of the founding family and the unprecedented scale of an investigation into Lotte Group.

The initial public offering (IPO) of the de facto holding company of one of Korea’s biggest retail groups was billed as the largest IPO ever in Korea. The decision came after the IPO schedule was postponed once from this month to July, and the stock price has scaled back from 5.7 trillion won ($4.8 billion) to 5.3 trillion won.

“Regarding recent issues revolving around our company, we decided to indefinitely delay the scheduled IPO and cancel all related schedules for the sake of protecting the investors,” the group’s hotel unit said Monday. “Publicly listing Hotel Lotte was a key measure in restructuring the management of the group such as lowering the share ratio held by Japanese stockholders and diversifying the shareholder constitution. We are going to closely go over the issue with the company as well as an auditing institution.”

Currently, 99 percent of shares in Hotel Lotte are held by Japan-based investing companies including Lotte Holdings, the de facto holding company of Lotte Group’s Japanese business, which has 19.2 percent of the hotel business.

With issuing more shares through the much-anticipated IPO, the company was vying to lower the share ratio held by Japanese investors to 65 percent. Shin Dong-bin, the Lotte Group chairman, pledged last year that by publicly listing the company in Korea’s market, he will further pursue clean management of his affiliates, which were constantly under fire for cross-shareholding.

The decision came after Shin Dong-bin took control of the retail giant following a feud with his older brother, Shin Dong-joo, which cost Lotte Group its license to run its second-largest duty-free business at Lotte World Tower late last year.

Lotte has been trying to regain that license to secure its No. 1 spot in the duty-free business by getting on the government’s good side by enhancing its transparency through the IPO.

The probe is generating more severe consequences than initially expected, as it rekindled the family feud between the brothers in trying to control the leadership of Lotte Group.

Shin Dong-joo, head of SDJ Corporation, posted a statement on Friday on the company’s Japanese website questioning his brother’s leadership and citing the ongoing prosecutor investigation.

The statement condemning the management structure solely led by his younger brother since last year is expected to play a critical role when a scheduled general meeting for Lotte Holdings is held this month.

Industry watchers highly expect the eldest son to go for a similar attempt like what he did in March, when he planned to get rid of Shin Dong-bin and his supporters and form a whole new board consisting of his own people. But whether he will be able to win back the employee shareholders’ support, in which their association takes up 27.8 percent of the Japanese company remains questionable. In March, Shin Dong-joo lost despite promising to distribute 2.5 billion won worth of shares to each of them, in return of voting for him.

The younger brother, Shin Dong-bin, who is currently in Cancun, Mexico, attending the International Ski Congress as head of the Korea Ski Association, plans to travel straight to Japan after attending a groundbreaking ceremony of a joint business venture with American petrochemical company Axiall in Louisiana today.

According to a Lotte Group spokesman, Shin Dong-bin is expected to return to Seoul on Monday to personally vindicate allegations against him.

After hearing of the prosecutors’ raid on Friday, Shin Dong-bin was reported to have said he feels responsible as head of the conglomerate and plans to explain all of the allegations of slush funds.

“However, depending on how the shareholders meeting in Japan goes, his return to Seoul could be postponed,” the spokesman said.

Since the prosecutors’ probe began, Lotte has also canceled its decision to take part in a bid to acquire Axiall.