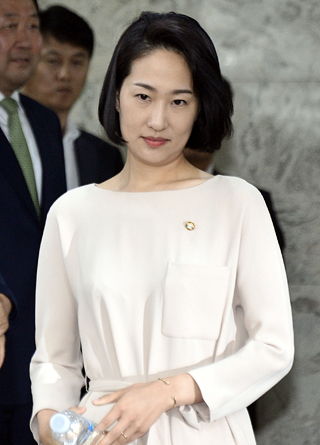 Kim, a proportional representative of the People’s Party in charge of public relations, stands accused of receiving some 238 million won ($203,059) in kickbacks from advertisement companies during the April 13 general elections.

After the allegations were raised, Ahn’s support rate dropped from 14.4 percent on Thursday to 10.3 percent on Friday, according to a Realmeter poll released Monday.

Last week, the National Election Commission (NEC) filed a complaint against Kim for alleged election law violations, which led to the Seoul Western District Prosecutors’ Office leading a raid on Thursday on six offices of election promotion advertising and printing firms that were suspected of offering kickbacks to the lawmaker.

Kim, who is 29 years old, secured a seat as the youngest lawmaker in the newly-elected National Assembly.

She headed the start-up design company Brand Hotel, which received a total of 238 million won from a printing firm and a broadcast marketing company, without having offered any services, according to the NEC.

These two companies allegedly signed fake contracts with Kim’s design company, and according to the election watchdog, the marketing company offered Kim’s Brand Hotel a total of 128 million won, with 68 million won in rebates, as well as 60 million won through a check card.

The other printing firm also appears to have provided Brand Hotel 110 million won in a similar fashion.

However, it is unclear yet whether Rep. Kim requested such rebates or where the check card was used.

Rep. Park Sun-sook, the party’s former secretary general, who also serves as a proportional representative, led the party’s campaign and is suspected of ordering the rebates to Brand Hotel and falsifying a report to the NEC on campaign expenditure.

The party denied that the funds were used during the election for its campaign.

Rep. Park Joon-yung, another lawmaker of the People’s Party and a former South Jeolla governor, faces a separate prosecution probe over allegations of involvement in the receiving some 360 million in kickbacks in return for favors should he be elected.

Ahn on Friday said that the party would actively cooperate with the prosecutors’ probe and said, “Whether or not it is true, I am sorry for causing worry to the People’s Party.”

At his party’s Supreme Council meeting that day, he said of the allegations, “I have been told it is not true, but the party will actively and objectively confirm the facts. If there is even a single problem, we will deal with it sternly.”

The illegal political fund allegations are a blow to the People’s Party, which emerged victoriously as a third party, gaining 38 seats in the National Assembly in the April general elections, on a platform that promised new politics.

The People’s Party on Monday launched a four-member fact-finding committee to probe the rebate allegations, headed by legal expert Rep. Lee Sang-don, a member of the Supreme Council, and other lawmakers with backgrounds in law and prosecution.

“We will first investigate the rebate issue related to the NEC complaint,” said Son Geum-ju, spokesperson for the People’s Party. “Afterward, we will discuss expanding the investigation.”

There have been questions over the nomination process of the proportional representatives, as well.

Three of the proportional representative nominees, Shin Yong-hyeon, Oh Se-jung and Kim Su-min, were suddenly included on the final shortlist on the day of its announcement on March 23.

Kim’s father, Kim Hyun-bae, is also a former conservative lawmaker who reportedly has powerful connections within the party.