Park calls for era of cooperation

Park calls for era of cooperation 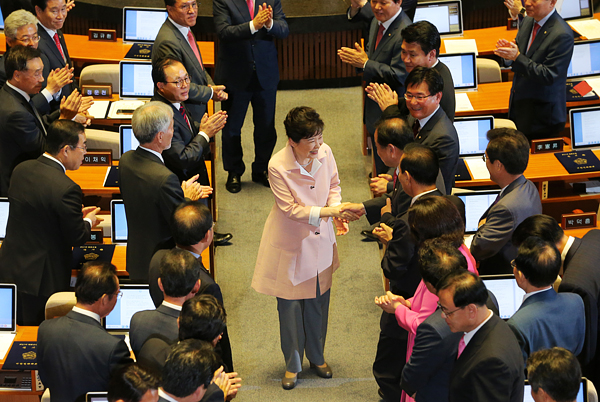 President Park Geun-hye greets lawmakers while making an exit from the opening of the 20th National Assembly on Monday. [JOINT PRESS CORPS]

President Park Geun-hye promised Monday to respect the National Assembly as a partner in state affairs, as the legislature held an opening ceremony to start its term.

The opening ceremony for the 20th National Assembly took place in the morning, and Park delivered a speech stressing the importance of cooperation in politics.

Her speech was criticized by rival political parties for being tired and overly familiar.

“The 20th National Assembly is starting its term with the people’s expectations and ambitions, and I hope it becomes a reliable pillar of state affairs in order to allow the people happy lives,” Park said. “The administration will actively communicate and cooperate with the National Assembly to give hope to the people.”

“I will respect the National Assembly as a partner in state affairs and create a path to an advanced Korea with the people,” she said.

In the April general election, Park’s Saenuri Party won 122 seats in the 300-member National Assembly, while the Minjoo Party won 123 and the People’s Party won 38, ending two decades of two-party politics and bringing back a three-party system.

After Rep. Chung Sye-kyun of the Minjoo Party was elected the new Assembly speaker, Chung formally surrendered his party affiliation as required. The Saenuri Party and Minjoo Party now occupy 122 seats each.

As the two liberal parties’ cooperation is now critical to pass bills, Park made another appeal to the legislature to quickly approve pending bills related to the economy.

“Most of all, labor market reform must be completed as soon as possible to ease the laid-off workers’ hardships and expand opportunities for employment,” Park said.

The 19th National Assembly refused to pass the administration’s labor reform legislation during its term.

“North Korea recently attempted to change the mood by proposing talks in the face of strong international punishment [over its nuclear and missile programs],” Park said. “A proposal for talks without denuclearization is nothing but a deception.”

She made clear that her administration would not talk to the North simply for the sake of talking.

“The government will restrain the North from provocations with strong defense capabilities, and force the North to give up nuclear arms and join the path of true change,” she said.

Following the opening ceremony, Park met with Speaker Chung and leaders of the Saenuri Party, Minjoo Party and People’s Party in a reception. She reiterated her promise to communicate more actively.

Liberal parties said they were generally disappointed with Park’s speech.

The Minjoo Party, People’s Party and Justice Party said Park’s speech contained nothing new and failed to show she had learned anything from her party’s crushing defeat in the general election.

“It was meaningful that Park admitted to the need for reconciliation and cooperation today,” Rep. Park Kwang-on, the Minjoo Party spokesman, said.

“But she appeared to be extremely lacking in her will to humbly accept the general election outcome and reflect the public’s sentiment in state affairs.

“To resolve the economic crisis and inter-Korean relations, the administration must have more talks with the National Assembly,” Rep. Park said.

“It was disappointing that Park pressed the legislature to pass the labor reforms by focusing on the issue of workers without mentioning the responsibilities of the government and the companies when she talks about restructuring of the shipbuilding and maritime industries.”

“Most of her speech was about labor reform, deregulation, the creative economy, cultural prosperity and the North Korea nuclear issue,” Justice Party spokesman Han Chang-min said. “It sounds like the same old song being played over and over again by a malfunctioning record player.”