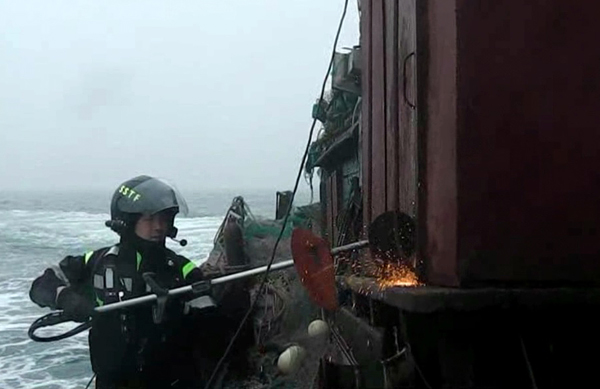 An Incheon Coast Guard officer pries open the iron doors of a Chinese boat’s bridge with a cutting machine on Saturday. The boat attempted to flee to North Korean territory with South Korean officers still on board, before being seized for fishing illegally in South Korean territorial waters. [NEWSIS]

The Incheon Coast Guard requested on Monday detention warrants for the Chinese sailors caught fishing illegally in the Korean territorial waters near the Northern Limit Line (NLL) in the Yellow Sea on Saturday.

Those held responsible for trespassing include a 48-year-old captain, a 50-year-old engineer and the boat’s 41-year-old navigator.

Even as they were being transferred to Incheon for questioning, the seven captured sailors attempted to avoid responsibility by saying that “the captain and the engineer were ill and went back to China.” Authorities managed to identify the two after more investigation.

The interlopers had been fishing 8.6 kilometers (5.3 miles) south of the NLL near Yeonpyeong Island when a Korean Coast Guard squad approached. The fishermen ignored orders to halt, blockading the iron doors to the bridge. They managed to flee 1 kilometer north of the NLL even after 14 Coast Guard squad members had boarded the boat.

If they had successfully made it to the North Korean waters, carrying the South Korean officers with them, Pyongyang could have seen it as a violation of its territory. The South Korean Coast Guard managed to prevent this by blocking the engine’s air vent, stopping further movement. Chinese sailors were taken into custody immediately after the iron doors were pried open with a cutting machine.

As much as 45 kilograms (99 pounds) of fish was found on the 50-ton boat during the raid, but investigators suspect more was taken as the boat had been fishing near the NLL for about two months before capture.

Incessant Chinese cross-border fishing activities prompted Korean fishermen who operate in the Yellow Sea to propose a number of measures to the government at a Ministry of Oceans and Fisheries meeting Friday. Some of the proposals included permission to expand fisheries and fishing times, subsidies and further aquatic resource development.