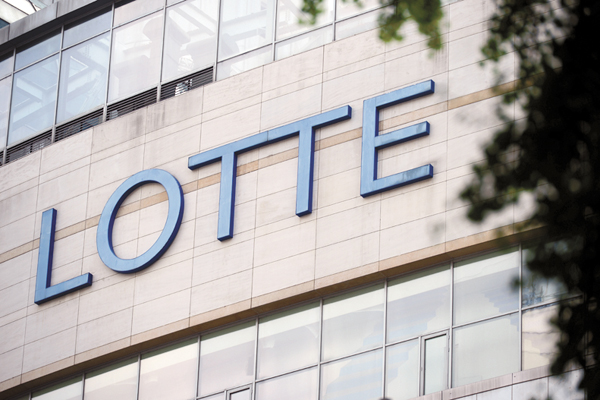 The headquarters of Lotte Group in Jung District, central Seoul, on Monday. [NEWSIS]

The headline-grabbing investigation of Lotte Group made a significant breakthrough Monday, when an executive said under questioning that millions of dollars from the conglomerate’s affiliates were funneled each year to founder Shin Kyuk-ho and his son, Chairman Shin Dong-bin.

Although the Lotte executive reportedly denied that the father and son unlawfully acquired the money, claiming the payments were salaries and dividends, prosecutors said they would dig deeper to see if the pair was financing slush funds.

According to the Lotte executive, Shin Kyuk-ho received 20 billion won ($17 million) each year from Lotte affiliates, while his son received 10 billion won.

Prosecutors have been looking into whether Lotte Group created slush funds through financial transactions among its affiliates and if the money was pocketed by top figures at Lotte.

Prosecutors actually confiscated 3 billion won from the executive, who as executive director of the Lotte policy headquarters is in charge of founder Shin Kyuk-ho’s financial management.

The executive, who was summoned Sunday with two others for questioning, had hidden the founder’s money in the house of his sister-in-law.

Authorities are particularly looking into Lotte’s mergers and acquisitions, chiefly the deal in 2010 when the group bought a Chinese TV shopping network for some 190 billion won. Sales of the network plummeted from 187 billion won in 2014 to 176 billion won last year, with operating profits falling below zero.

Prosecutors are now questioning why Lotte paid so much for the network and whether part of the money was routed back under the table to its executives.

Lotte said in a statement that the group was expanding overseas during that period, and China’s economy was thriving after the 2008 Beijing Summer Olympics.

As for the 190 billion price-tag, Lotte said that the price was calculated by Credit Suisse, its financial adviser.

“The Chinese economy is now slowing, and there are a lot of home-shopping companies opening up there,” a source from Lotte Home Shopping said on the condition of anonymity.

“China sets tough regulations for broadcasters, so not only Lotte but all other [Korean conglomerates that expanded operations in China] like GS Home Shopping and Hyundai Home Shopping are suffering from losses.”

The raid on Lotte began last Friday, when nearly 200 investigators from the Seoul Central District Prosecutors’ Office swarmed Lotte headquarters, as well as seven affiliated companies and executives’ residences for more than 12 hours. It is the largest investigation of the country’s fifth-largest company to date.

Prosecutors on Saturday said they loaded seven 1-ton trucks with some 200 boxes filled with account books, computer hard drives and other documents about Lotte affiliates and the conglomerate’s shareholding structure.

Among the 17 different locations that were raided, Lotte’s policy headquarters was the most scrutinized. Materials from that raid filled more than one truck. Executives working there were forced to surrender their cellphones and SIM cards.

So was the residence of his second-eldest son, Lotte Chairman Shin Dong-bin, 61, in Pyeongchang-dong, central Seoul.

A safe in the founder’s office was empty, leading authorities to assume that Lotte had moved key evidence, a suspicion the company adamantly denied.

Lee In-won, 68, vice chairman of Lotte Group’s policy headquarters, and some 30 other high-level officials were banned from leaving the country.

Authorities also vowed to look into whether Lotte Group lobbied political and military circles during the Lee Myung-bak administration to win a construction license for its Lotte World Tower, which is still being built in Jamsil-dong, southern Seoul, to reach 123 stories high.

The announcement prompted local political analysts to wonder whether prosecutors had a political motive behind the raids. The Blue House denied the accusation over the weekend.

While the presidential office did not make any official comment about Lotte, an anonymous source said the prosecution started the investigation because it received a “tip-off” from somebody. The source did not say exactly who.

Spokesman Ji Sang-wuk of the Saenuri Party, to which current President Park Geun-hye belongs, said in a statement that Lotte should be punished if prosecutors prove it violated any corporate laws.