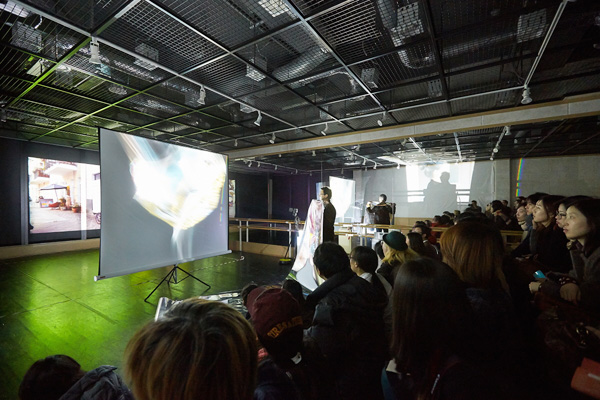 Artist Song Ju-ho’s video and theater performance piece titled “A Boredom that Gets Bigger with the Enlarging Universe” is included in this year’s MEET festival in Mullae-dong, southwestern Seoul. [MEET ORGANIZING COMMITTEE]

Mullae-dong in Yeongdeungpo District, southwestern Seoul, still retains the look of an old steel market, as its alleyways are lined with old iron foundries.

However, instead of ironworkers pounding on pieces of metal, the old foundries are now occupied by artists working on creations ranging from theater and music to film and visual art.

Drawn by the cheaper rent, these young artists began to flock to the area in 2005 from places like Hongdae and Daehangno. Witnessing the increasing number of young artists settling in the area and creating a small artistic community, the Seoul Foundation for Arts and Culture decided to jump in and support young local artists in 2008. Together, they established “Mullae Emerging&EnergeTic” (MEET) in 2011, an annual festival where all the Mullae-dong artists come out from their spaces and showcase their works to the public.

Currently, there are about 250 artists and about 100 art studios in the Mullae Art Village, according to the foundation. The works are not only limited to paintings and photographs, but include installation art, sculpture, design, illustration, video art, fashion, street performance, architecture and more.

Now in its sixth year, the 2016 festival kicked off on Friday with a nine-day music festival “Mullaenale.” The whole festival will run through December.

According to organizers, this year’s festival consists of seven exhibitions, two performances and one film screening, as well as three book launches, one literary event and three cultural events. About 100 artists are participating in this year’s festival. Some exhibitions will show how artists turned waste from iron foundries into artworks, while others will encourage participation from local residents.

Although MEET does not pick specific themes for the festival each year, the organizers say they focus on showing artworks that interest both the artists and the residents of the area.

For example, in August, a performance piece titled “In.dust.real” will be held along the iron foundry alley, and participating artists will “dust” off this industrialized neighborhood by sweeping the floor in an attempt to stress the importance of protecting the environment. In October, elderly residents of the neighborhood will stage a play that they have worked on together with artists about preventing Alzheimer’s and depression with art.

The ultimate goal of the project, according to organizers, is to “enhance and express Mullae artists’ creative capability and vitality through collaborating with local businesses while communicating with the public.”

“Since music and arts do not require language proficiency, I believe, regardless of ethnicity, all people can enjoy the arts and culture of MEET,” said Choi Jeung-phill of the organizing committee. “Since ‘Mullaneale’ is a rock festival, many foreigners came to enjoy the concert last week.”

The “VIAFringe Festival,” a music concert set to take place from Oct. 29 to 30, as well as the “Printing Festival” from Oct. 30 to Nov. 6 are perfect for those who don’t speak Korean, according to Choi.

Admission is free. Go to Mullae Station, line No. 2, exit 7, and find the Mullae information desk. The concerts and exhibitions have different schedules and locations, so it’s best to check with the information desk.
For more information, visit cafe.naver.com/mullaeartspace or call (02) 2676-4300.