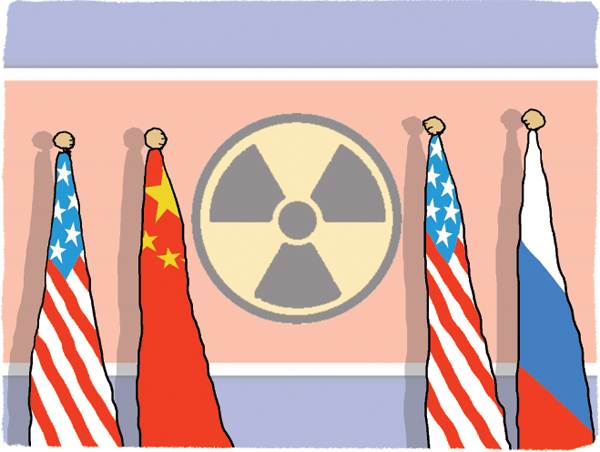 The diplomatic topography around North Korea is complicated. The visit to China by Ri Su-yong, the Workers’ Party vice chairman and former foreign minister, after the North’s latest missile test was followed by a UN Security Council statement and the designation of the North as a “primary money laundering concern.” Here, friction between the United States and China is created. The North Korean nuclear situation is getting more complex, and we need to make more thorough plans to respond accordingly.

The current situation is the outcome of the complicated calculations of each country involved, so we should start from here. China pursues denuclearization but values the geopolitical interests of North Korea. Lately, China’s friction with the United States is also a factor.

China’s moves may therefore seem confusing in the context of denuclearization. China emphasizes its clear and consistent stance on the North Korean nuclear issue because they are aware that from the outside, China’s position seems contradictory and ambiguous.

Ri’s visit to China revealed China’s situation. The original purpose of the visit must have been the restoration of China-North Korea relations, and he was supposed to meet with Chinese President Xi Jinping. But North Korea conducted a missile test while Ri was in China. This was a rude move. The UN Security Council openly denounced the test.

But the next day, China, one of the permanent members of the Security Council, received the representative of the country it had just denounced. China knows how awkward this seemed. Beijing was not completely pleased but had to go on with the meeting anyway after thinking about it. China has resorted to stop-gap measures amid denuclearization, its geopolitical situation and friction with the United States.

The United States and Japan intend to strategically manage China within “universal” norms aside from the denuclearization of North Korea. From problems in the South China Sea to trade, currency and cyber issues, the U.S. won’t let China write new orders. China protests that it is being checked excessively.

At this juncture, the United States initiated the UN Security Council statement and designation of North Korea as a prime money laundering concern. The results are up to China and Russia, but they cannot be expected to provide active support.

The United States and Japan, too, have other policy goals aside from denuclearization, and one policy may be interrupted by another. More prudent diplomacy from the United States is called for, as it has the greatest influence over the nuclear issue.

North Korea exploits the complicated situation. Pyongyang thinks it can move about while the U.S., China and Russia compete against one another. North Korea under Kim Jong-un denies denuclearization goals and brags about testing weapons of mass destruction. It wants to restore relations with China and Russia to improve its economy. Pyongyang assumes it has earned China’s understanding, as its courtesy call to President Xi was taken after the missile test.

Seoul, therefore, needs to respond accordingly. If the cause of denuclearization is the centripetal force, the strategic intent of each country is the centrifugal force. Korea needs to strengthen its centripetal force and reduce centrifugal force. Seoul should create an environment where countries can cooperate against the North Korean nuclear threat while still competing against each other.

In the case of the Iranian nuclear situation, the centripetal force of denuclearization was greater than the centrifugal force of competition among the United States, China and Russia. So the negotiation was between the international community and Iran, and a deal was struck.
For the North Korean nuclear threat, the centrifugal force is greater, and the negotiation is between South Korea-U.S.-Japan and North Korea-China-Russia.

At this juncture, there are a few points we must keep in mind. Let’s look at the Korea-U.S.-Japan meeting. While cooperation among the three countries is important, it may be an obstacle to cooperation with China and Russia, especially when those countries and the United States do not get along. So the tripartite meeting should be operated as a response to North Korea’s provocations or the negative moves of China and Russia. In this context, it is not clear if recent meetings were really necessary.

Second, we need to reconsider North Korea policy focused on sanctions. While it is fair to impose sanctions, adhering to them as the only solution won’t lead to cooperation between China and Russia, as it inspires strategic centrifugal force.

Finally, we need to look at the proposed deployment of the Terminal High Altitude Area Defense (Thaad) system in Korea. Thaad is a prime cause of centrifugal force, as the security interests of South Korea and the United States collide with the strategic interests of China and Russia. Now that Seoul and Washington have agreed on deployment, Korea has entered a serious game.

What Seoul can do now is to handle Thaad in the specific context of South Korea’s security interests over North Korea’s missile threat and communicate with China and Russia, which perceive Thaad as part of the U.S. East Asia strategy.

If Korea acts passive and seems to be swayed by the U.S., China and Russia will be assured that Thaad is a part of the American strategic agenda, not Korea’s security measure. The move toward denuclearization could be overwhelmed by the conflict over Thaad. In this age of friction among powers, creativity, flexibility and drive are desperately needed for Korea’s diplomacy.


*The author, a former head of the Korean Peninsula Peace Negotiation Team, is a visiting professor at Seoul National University.