Monopolies in the energy sector may be reformed

Monopolies in the energy sector may be reformed 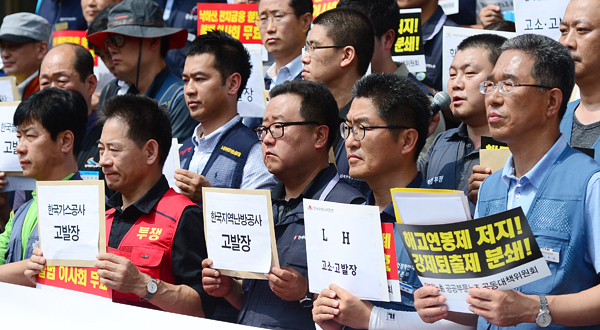 Members of the Federation of Korean Trade Unions and Korean Confederation of Trade Unions protest a meeting on adopting the peak wage system in front of the Sejong Center for the Performing Arts in downtown Seoul on Tuesday. The meeting was presided over by President Park Geun-hye. [NEWSIS]

The energy sector, monopolized by such state-run companies as the Korea Electric Power Corporation (Kepco) and Korea Gas Corporation (Kogas), will gradually be opened to the private sector.

Troubled companies like the Korea Resources Corporation (Kores), which has a debt-to-capital ratio of 6,905 percent, will be subjected to radical restructuring, including possible forced mergers.

The government announced measures on Tuesday to overhaul the energy, environment and education sectors in hopes of reducing the role of public corporations and bringing more efficiency. 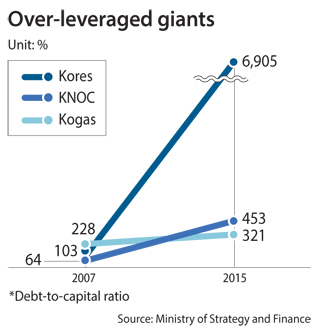 Public companies in the energy business were a particular focus because of aggressive expansion of overseas resource development projects pushed by the Lee Myung-bak administration, which were costly failures.

“[Businesses] that the private sector is better at should be handed over to the private sector, encouraging competition by lowering the barriers in areas that have been harmed by monopolies,” said President Park Geun-hye, who presided over a meeting held at the Central Government Complex in downtown Seoul on Tuesday.

“There have been arguments through the years, especially on the energy business, to readjust the roles since many institutions have made overlapping investments and built up a massive fiscal burden.”

This was Park’s first attendance in two years at a public institution meeting, which included Deputy Prime Minister for the Economy and Finance Minister Yoo Il-ho as well as heads of 126 public companies.

Yoo echoed the need to overhaul the public sector.

“Since 2013, public institutions have succeeded in reducing insolvencies, reckless management and have adopted the peak wage system through two normalization plans,” Yoo said. “However, we need to work hard to bring about results that will meet the expectations of the public.”

Reforms that the government has pursued since 2013 have had little impact on curbing the growing debts of public companies, especially those in the energy business, which have been blamed on aggressive expansion in overseas energy investments.

“There are a total of 27 institutions working in the energy sector, which accounts for 10 percent of the total number of public institutions, and their debt accounts for one third of the total,” said Noh Hyeong-ouk, deputy minister for fiscal affairs at the Ministry of Strategy and Finance. “We believe there needs to be various actions taken such as restructuring, having more private sector companies in the market and having institutions change their lines of business if they overlap with each other.”

“KNOC, Kores and Kogas are currently operating 91 projects overseas, and they are becoming insolvent due to the huge amount of investment carried out and falling resource prices,” the Finance Ministry said.

The ministry will force them into self-rescue plans to reduce the number of employees by 20 to 30 percent.

“The coal industry has continued to slow, and the number of employees at Kocoal dropped from 13,060 in 1988 to 1,368 in 2015,” said Chae Hee-bong, deputy minister of energy and resources policy at the Ministry of Trade, Industry and Energy.

The Ministry of Trade, Industry and Energy, which will be in charge of restructuring plans for energy-related institutions, mentioned some of its goals as well.

“Kocoal’s management and labor will discuss reducing the number of employees and volume of production,” Chae said. “We don’t think there will be much conflict since many employees are near retirement age.”

The government is planning to merge the Korea Electrical Engineering & Science Research Institute with Kepco.

“Some six power companies including Kepco have been unproductive overseas as they were competing with each other,” the Finance Ministry said. “The government will designate certain sectors or fields so that they can refocus from now on.”

The ministry plans to have Kepco focus on finding new energy sources and invest in large power plants. The remaining five power companies will focus on different sectors such as renewable energy sources.

The energy sector will gradually be opened to the private sector. This includes the power supply exclusively provided by Kepco and the gas supply provided by Kogas.

“It is not just Korea that is facing the need to restructure due to low crude prices,” Chae said.

The government and public sector will hold at least 51 percent of their shares and some 20 to 30 percent will be sold on the market.

“We expect these companies to expand their investments to find new growth engines for the energy industry or become financially stable through this plan,” the Finance Ministry said.