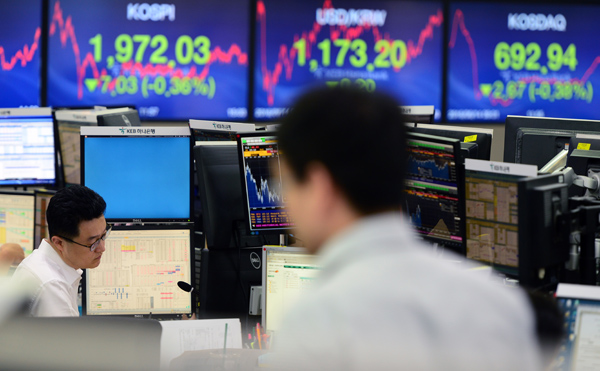 A screen at KEB Hana Bank’s headquarters in central Seoul shows the benchmark Kospi falling 7.03 points, or 0.36 percent, to close at 1,972.03 on Tuesday. The Kospi fell for the fourth straight day as growing anxiety over the United Kingdom leaving the European Union, the so-called Brexit, weakened investor sentiment. [NEWSIS]

Fears over whether the United Kingdom will vote to leave the European Union have weighed on Korea’s stock markets, sending financial indices lower.

Concerns about the U.K. referendum affected both the main bourse Kopsi and small-cap Kosdaq.

Polls on the so-called Brexit stood at almost 50-50 before the weekend, but a series of more recent polls signal that momentum has swung toward the “leave” camp 10 days before the June 23 referendum.

Analysts warn that concerns surrounding Brexit will trigger a sell-off in the country’s stock markets, as investors could opt for safe haven assets such as the Japanese yen instead of emerging market stocks.

“Starting this year, a heavy inflow of foreign capital entered Korea, especially from the U.K.,” said Lee Kyung-min, an analyst at Daishin Securities.

“If the Brexit happens, it will put pressure on investors’ capability to buy and will increase uncertainties. The market fears will linger in the mid-to-long run as the issue will have far-reaching impacts on different sectors.”

U.K. investors hold 36.5 trillion won ($31 billion) worth of stocks in Korea, accounting for 8.4 percent of all foreign investors, according to the Financial Supervisory Service.

The investors belong to the second-largest foreign investors group after the United States.

The Brexit fears were heightened on Monday when the Kopsi fell below the 2,000 level to close at 1,979.06, the highest one-day fall in four months.

The Kospi extended its loss on Tuesday to close at 1,972.03, down 0.36 percent as the coming rate decision meeting by the U.S. Federal Reserve added to investor concerns.

SK Securities predicted on Tuesday that the Kospi could plunge to around the 1,800 range should the U.K. choose to quit the EU.

In light of the uncertain market landscape, foreign investors sold a net 142 trillion won of listed stocks in May, following three months of net purchases. U.K. investors pulled out the third-most amount of money, 461.2 billion won, after Singapore and the United Arab Emirates.

Still, other analysts warned against excessive fears about the potential exit since the impact on Korea would be modest.

“The ties of Korea with the U.K. are limited, whereas those of emerging European countries are deeper,” said Joon Kee, executive director of alternative and overseas investment at J.P. Morgan Asset Management Korea. “The impact will be confined to short-term volatility.”

Analysts also noted that the exit won’t take place immediately even if the referendum voted to exit the EU. The U.K. should undergo complicated negotiations with decision-making bodies at the EU, a process that could last up to 10 years.

“The referendum is the process that is intended to listen to the public voice ahead of policy makers’ decision, though the markets react to every indications related to the referendum,” said Kim Yong-goo, an analyst at Hana Financial Investment.

Along with the stock market, a Brexit could further weaken the Korean won and complicate trade agreements with the EU, according to the Institute for International Economic Policy.

“A Brexit will cause a weak pound and won, triggering capital outflows,” a report by the institute said. “The Korean government would also need to renegotiate a trade agreement with the U.K. in case the country leaves the EU.”