‘I may offer some help to Ban, Won, Yoo or Ahn’

‘I may offer some help to Ban, Won, Yoo or Ahn’ 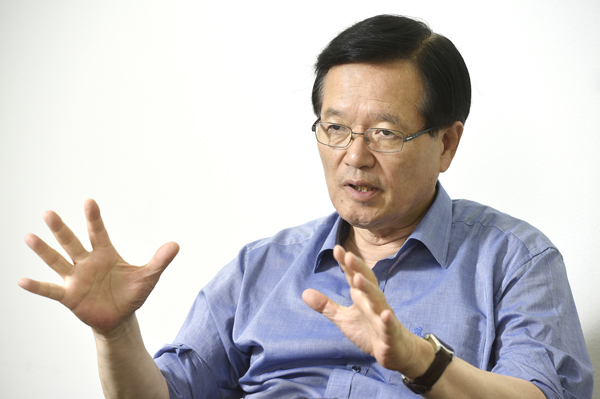 The office in Yeouido, western Seoul, has yet to open its doors, but it does have a banner hanging on the wall of its conference room with a logo that is emblazoned with three colors, representing his desire to build a place for members of the three parties to cooperate, free from their respective political propensities.

In a JoongAng Ilbo interview, the former speaker shared his plans for the think tank, why he made up his mind to leave his former party, the Saenuri Party, and his future presidential candidacy.


Q. You used the term “big tent” to describe the institute. Would you clarify what you mean?

A. By “big tent,” I mean a platform where brain trusts can speak free from partisanship. It started from my ambition to build a healthier, more faithful and more impartial society.

But people think I have some hidden political agenda. If the institute becomes politicized, it will commit itself to representing the voice of rational conservatism and conservative-centrism. I don’t know what exact form it may take.

So the think tank is a new vision for the good of the country and not an endeavor to make your political mark, is that correct?

Yes. President Park Geun-hye made an institute before running for office, and people used that to interpret my move as laying a stepping stone to run for president, which is not true. I don’t want to set a certain position as my goal for the remainder of my life. Where I eventually end up is for God to decide.

What is the institute doing now politically?

I am a little tired right now after my 20 years — five consecutive terms — as a lawmaker in the National Assembly, so I do not have a picture drawn out yet. I plan to think about what to do with the institute in July.

But I do know that the Yeouido Institute will not imitate other conventional political parties. Not only are the parties not prepared to properly function in the smartphone era, but elected officials are not doing their jobs, which is to represent us. I believe we need to implement some direct democracy for better representation.

At the beginning of this year, weren’t you planning to make a run in the general election?

No, I had made up my mind not to run for the National Assembly in November. I just didn’t publicize it because I was afraid that would influence the redrawing of electoral districts.

I did think long and hard about running when corporate groups in Gwangju pushed me. Although I am an honorary citizen, I thought it was wrong to represent a place where I don’t live.

What do you think about putting a very revered figure as the speaker for a longer term instead of taking turns every two years?

When I became speaker, I once said it requires at least three to four years to make a difference. I appointed Park Hyung-joon as the National Assembly’s secretary general instead of the person recommended by the then-presidential chief of staff in order to reform the National Assembly. But reaching the tail end of my tenure, I grew tired and thought two years was enough.

So why leave the party?

The Saenuri Party has lost its ability as a conservative party that we have spent a long time building. In the official nomination process for the April 13 general election, I witnessed their growing arrogance. Even now I sense the indolence and ineptitude from its members.

Now, will I be able to fix those things if I return? If I do return, I’ll probably wind up as a standing adviser. All I would be able to do in those positions is merely hold officials accountable, no proactive measures whatsoever. I didn’t involve myself in politics to do those kinds of things.

Why has the 19th National Assembly drawn so much criticism?

As the speaker of the 19th National Assembly, it is sad to face such criticism. But I do believe the National Assembly is slowly changing and evolving. What hurt me was that some lawmakers tended to perceive lawmaking as just another profession rather than as being a public servant.

Rather than working for the people of the next generation, they waste time prolonging their tenure in government by begging for the love of the people in their local districts.

Shouldn’t we blame the presidential system and the single-member constituencies that are essentially winner-take-all games?

First of all, I believe the next president should immediately amend the Constitution within the first year of his or her tenure to change the whole electoral system.

Although this may grant more power to the president, the government needs to form more parties. More parties will require closer cooperation. If there is any presidential candidate who pledges to create cooperation among the parties, that’s who I’ll cast my vote for.

Would the president sacrifice all his early tenure to tackle that issue?

That is the problem. What is driving our politics into the ground is populism. Candidates in both the presidential elections and general elections come up with legislative promises only to please the public. They are not necessarily conducive to the country’s health, and it is too much for the nation to bear.

You mentioned that you would support anyone who espouses cooperation among the parties. Are there potential nominees that advocate such cooperation?

I believe anyone with more than three terms in the National Assembly under his or her belt should be qualified to run for the presidency.
Whether I support them is a different matter.