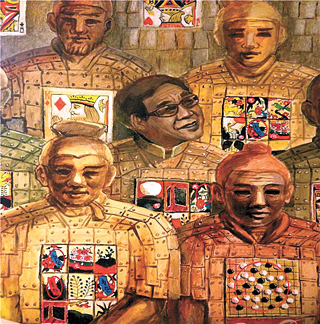 “Terracotta Warriors,” one of the many paintings from the hwatu (Korean traditional card game) series, was revealed by prosecutors to be one of the paintings singer Cho Young-nam did not create but sold with his name signed on it. [SOKCHO BRANCH OF CHUNCHEON DISTRICT PROSECUTORS’ OFFICE]

Singer and self-proclaimed painter, Cho Young-nam, 71, was indicted without detention for fraud by the Sokcho branch of the Chuncheon District Prosecutors’ Office in Gangwon Tuesday.

Cho’s 45-year-old manager, surnamed Jang, was also charged for assisting the one-time Korean superstar of the 1970s and 80’s in selling paintings he did not create after signing his name on them.

Investigation results were also announced in a press conference the same day at the Sokcho branch.

The case centers on the so-called hwatu series - paintings inspired by a traditional Korean card game of the same name.

Prosecutors suspect that Cho employed ghost painters, including 60-year-old Song Ki-chang, from September 2011 until April last year to create the works for 100,000 won ($85) a piece, which the singer painted over “only very slightly” before selling them for 300,000 to 500,000 won each.

Investigations uncovered that Cho made around 180 million won after selling 26 paintings to 20 buyers.

The manager, Jang, is suspected of helping Cho sell five paintings worth a total of approximately 27 million won to three purchasers from last September until April this year.

According to the prosecution, although Cho has been emphasizing on TV that he painted the works himself, he revealed neither the fact that the paintings were outsourced nor the identity of the true painter, which are key elements in a traditional fine-arts transaction contract, and as a result, these transactions amount to fraud.

Refuting Cho’s argument that the ghost painter was no more than an assistant, prosecutors also pointed out that Cho had given long-distance orders to Song, who then proceeded to paint and complete the paintings on his own, which is not exactly how an assistant normally works.

In the orders to Song, Cho gave some abstract ideas and made him complete the work independently, or asked him to recreate his “collage” works into paintings.

For instance, in a painting titled “Terracotta Warriors,” which was purchased by an art gallery, it was Song who did the majority of the work, before Cho drew a small baduk (Korean board game) board on the lower right-hand side of the painting, as well as adding a tiny umbrella and Korean characters on the cards in the painting.

Another painting, titled “Flowers from Far East,” was a collage of Cho’s earlier pieces that had been modified into a painting by coating the background with acrylic before Cho expanded the black surface on the lower side and signed his name on it.

Prosecutors said Cho ordered 200 to 300 such paintings from Song alone, and the total number of paintings sold would rise to 33, if the buyers who refused to testify were counted.

Meanwhile, representatives of 11 art organizations, including the Korean Fine Arts Association and Korea Professional Artists’ Association, visited the Sokcho branch of Chuncheon District Prosecutors’ Office Tuesday to file a complaint against Cho, claiming that Cho’s previous remark to the media is an act of defamation and libel.

Cho said that while it’s true his assistant helped create more than 90 percent of the paintings, this is common practice in the art world.