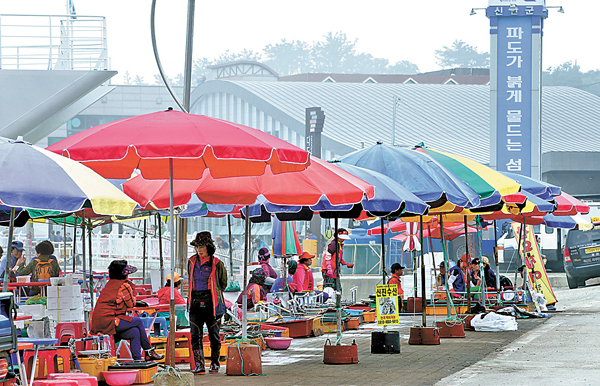 Seafood vendors wait on Sunday at an empty seafood market near a port on Heuksan Island, where a female teacher was raped by three local men. [KIM HO]

The fish market on Heuksan Island in South Jeolla is usually bustling with tourists waiting to try the island’s famous fermented skate, but the atmosphere was quite different on Sunday as workers were busy shooing away flies in the quiet, empty heat.

Heuksan Island is one of the most famous tourist attractions among the 2,219 islands in South Jeolla. The island was designated as the Dadohae National Park in December 1981 and has since become a major attraction for domestic tourists.

But the island’s name was marred after three local men raped a female teacher in her 20s in early June.

On a typical Saturday, the busiest day of the week, the island receives about 2,000 people, according to two ferry workers who run the route between Mokpo Passenger’s Terminal and the islands of Bigeum, Heuksan and Heung.

But last Saturday, they said, the total number of tourists who visited the area was only about 1,300.

“The ferries leaving Mokpo were only half full,” said one worker at the Dongyang Express Ferry Company.

Many of the island’s restaurants staff were either wiping down empty tables or staring at vacant seats.

“I’m more worried about the upcoming summer holiday season,” said a local restaurateur surnamed Chang. “Only eight people have visited the restaurant since Saturday. The whole island is suffering because of a few local thugs.”

The stalls at the local seafood market remain open despite the decrease in tourism.

“I came here because my friends and I have been planning this trip for some time,” said a 52-year-old tourist from Seoul. “But I can’t get that rape out of my mind and I don’t really feel comfortable here.”

Heuksan village is the third most populous village in Sinan County, with about 4,400 people, and most of its residents work in the tourism or fishing industries. The drop in visitors to the island has therefore hit local residents hard.

About 500 people canceled their trips to Heuksan Island for this weekend. Given that most travelers stay on the island for two days, about 60 local inns and motels suffered major losses.

“We usually run out of rooms,” said a local hotel owner surnamed Cho, “but last Saturday less than half our rooms were booked.”

Neighboring islands have also suffered losses after the rape case. Many who visit Heuksan Island also visit Heung Island, which is only 30 minutes away by ferry, so as Heuksan sees fewer tourists so, too, does Heung.

A number of locals say the rapists cannot be forgiven and that they should be punished severely, but they also express concern over the growing prejudice regarding the island.

“My children live off the island and now they say they’re afraid to tell other people that they come from Heuksan,” said a 70-year-old resident. “The rest of us will try to make the island a safer place, but we hope people won’t abandon us and our beautiful home here.”