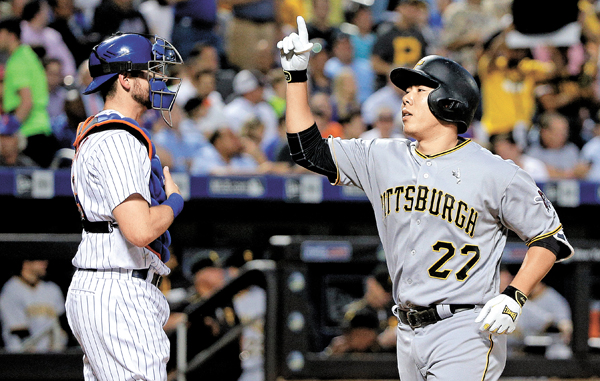 Kang Jung-ho celebrates his two-run home run as he rounds the bases past New York Mets catcher Kevin Plawecki Wednesday during the Pirates’ 4-0 win over the Mets. Wednesday’s homer was Kang’s ninth this season. [AP/NEWSIS]

Kang Jung-ho of Pittsburgh Pirates blasted his ninth home run on Wednesday to boost the Pirates over New York Mets 4-0 and escape the five-game skid.

The 29-year-old third baseman batted fifth on Wednesday and belted a two-run homer at the top of the sixth inning during his second at-bat of the day. Kang went 2-for-3 with a walk.

In the top of the first inning, Kang collected a base-on-ball against Mets starting pitcher Jacob deGrom and walked to first base. He got to second when Jordy Mercer singled two plays later but was unable to drive home.

At his first at-bat at the top of the fourth inning, Kang singled off of a 90-mile-per-hour slider by deGrom. Again, his attempt to drive a run failed with two batters after him striking out.

Kang finally broke the deadlock at his next at-bat. With a runner on base, Kang hammered deGrom’s second pitch to left center field, putting up two points on the scoreboard for the Pirates.

Taking the lead late in the game, the Pirates cemented their win when Starling Marte homered on a fly ball at the top of the eighth inning to add two additional runs-scored.

Kang’s dinger on Wednesday is his first in eight games and his ninth of the season. His last was against the Los Angeles Angels on June 5.

Kang, who is in his second year in the Major League Baseball (MLB), has played in 31 games this season. His home run on Wednesday came during his 101st at-bat.

Kang has been collecting homers at a pace much faster than last year. He collected 15 home runs during his rookie season after making his debut in April 2015. His ninth home run last year didn’t come until his 300th at-bat.

But his first season was cut short when he tore the medial collateral ligament in his knee in a double play attempt against the Chicago Cubs.

MLB.com projects Kang will nab 20 home runs this season, and at his current pace, that doesn’t look like a problem. Kang is currently third in home runs among Korean sluggers in the MLB. Park Byung-ho of Minnesota Twins leads with 11 homers, while Seattle Mariners’ first baseman Lee Dae-ho closely follows at 10.

As of Wednesday after the game against the Mets, Kang’s season records stand at a batting average of .294, 25 runs-batted-in, 13 runs-scored and nine home runs.

During an MLB game against Houston Astros, Oh replaced starter Jamie Garcia in the top of seventh inning and struck out one batter while yielding one hit and one run.

Although it wasn’t an earned-run since it came out of a fielding error, Oh’s run for nine straight perfect games came to a stop.

After the Cardinals’ 5-2 loss to the Astros, Oh’s season earned run average decreased to 1.57.