About 100 paintings by Chun Kyung-ja (1924-2015) are on display at her retrospective, which began Tuesday at the Seoul Museum of Art in central Seoul. [NEWSIS]

Chun Kyung-ja (1924-2015) is one of Korean art collectors’ favorites and regarded by the public as a highly gifted, yet tormented, female artist. However, her work hasn’t been studied seriously by many art historians.

The ongoing controversy over the authenticity of the painting “Beautiful Woman,” which was attributed to Chun but was declared a forgery by the artist herself, is making her more well-known to the public but is not enhancing understanding of the artist’s oeuvre.

The Seoul Museum of Art (SeMA), which has a large collection of Chun, intends to solve the problem with a new retrospective of the artist. 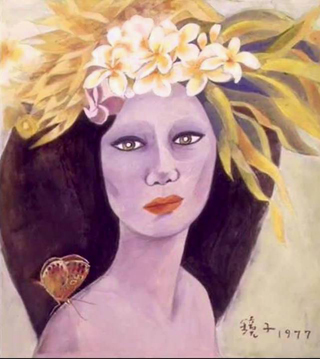 “The style of her paintings inspired or influenced greatly feminist artists of the next generations,” she continued. “This should be studied and appreciated more fully.”

The exhibition features about 100 paintings by Chun, including the 93 pieces contributed to the museum by the artist in 1998.

The exhibition is divided into four sections. The first section, “Life,” features paintings that reflect her turbulent life, including “A Mode of Life” (1951), the most important of her early works. The painting that depicts 35 wriggling snakes tangled with each other in traditional East Asian paint shocked Korea’s art scene and brought her to fame.

According to SeMA, she created the painting out of deep agony over the death of her father and sister, the Korean War and the troubled relations with her second lover, with whom she had her second daughter, Sumita Kim, and second son. “The artist said she was purified and saved by painting the snakes struggling to survive,” a curator explained.

The section also includes exotic paintings of women of lonely eyes and flowers or snakes around their bodies, for which the artist is best known.

The second section, “Journey,” features the paintings she created while traveling to various parts of the world, including distant places that were difficult to visit from Korea in the 1970s and ’80s.

At the opening, Chun’s daughter Sumita Kim told reporters that she was sorry for her mother that the exhibition overlaps with the prosecutors’ investigation, but the ongoing investigation will fulfill the artist’s wish that the truth be unveiled.

The National Museum of Modern and Contemporary Art delivered the painting “Beautiful Woman” to prosecutors on June 8 for investigation, after the daughter and son-in-law sued the museum for “defamation of the deceased.”

Chun declared the painting a forgery, but the national museum concluded it was genuine after an appraisal by a group of experts from outside the museum, which enraged the artist. Chun’s death last year rekindled the controversy.

The exhibition runs through Aug. 7, the day after the first anniversary of Chun’s death.
BY MOON SO-YOUNG [symoon@joongang.co.kr]

Admission is free. The museum is closed on Mondays. Go to Seoul City Hall Station, line No. 2, exit 10, and walk for five minutes.