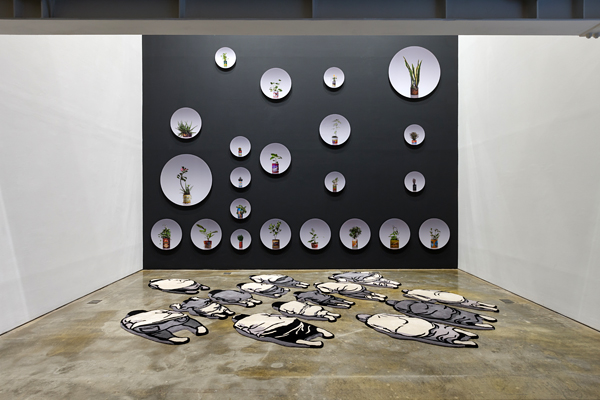 Anang Saptoto’s “People Prostration Seen from a Height of 720cm” is on the floor and Edwin Roseno’s “Green Hypermarket” is on the wall of SongEun Art Space. [SONGEUN ART SPACE]


Indonesia is one of the hottest emerging countries in the global contemporary art scene. A glimpse of its young artists is now on offer at SongEun Art Space in southern Seoul.

The ongoing exhibition, “Indonesia in SongEun: MES 56 ? Keren Dan Beken” features diverse works by 14 artists. They belong to MES 4, a nonprofit organization set up by artists based in Yogyakarta, the center of arts and culture on the Indonesian island of Java.

“The artists don’t only create both individual and collective works but also curate shows and carry out diverse projects,” said Noh Mi-ri of Laurance Geoffrey’s, the company that operates art programs at SongEun.

Among the first works visitors encounter is 14 hand-tufted carpets titled “People Prostration Seen from a Height of 720cm” by Anang Saptoto. The work recalls the fact that Indonesia is the most populous Muslim country, even though it is far away from the Middle East.

As another work related the nation’s religious culture, Nunung Prasetyo’s three photo albums “Holy Picnic” document his journey to Mecca with his family and attempt to represent a different side of the holy city, one that is more touristy and commercial.

The exhibition runs through June 25. Admission is free. The art space is closed on Sundays. Go to Cheongdam Station, line No. 7, exit 9, and walk for 10 minutes. For details, visit www.songeunartspace.org or call (02) 3448-0100.